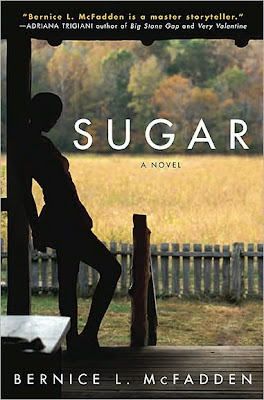 Sugar by Bernice McFadden is a book I would have to say will stick with me for a long time.  This book is not for the faint hearted I will say right off the bat.  The best way to describe it to me is raw and blunt- it is not a book prettied up for people to read- it’s authentic.  It gives us real life back in the 1950’s for the African Americans living in the deep South.  To me, this is what makes this book so powerful – the gritty realness of it.

Bernice McFadden’s writing is vivid in it’s descriptions and she writes with a depth of feeling I haven’t felt from a book in a long time.  Sugar is about two women: Pearl and Sugar and the ways in which lives intertwine even when you aren’t aware of it.  These two women end up affecting each others lives in so many ways.  As the book opens we are shocked by the brutal murder of Pearl’s daughter Jude.  It will leave you feeling battered just reading about it but it has implications further on in the book.  We then find ourselves whisked ahead fifteen years as these two women begin to forge the  friendship that will grow between them.

Pearl, a sixty year old woman is living her life with her husband Joe.  Jude was her daughter and Pearl has never gotten over the horror of the murder of her young daughter.  Pearl is just a simple woman living a simple life.  I was drawn to her in both her grief and in her personality in general.

Sugar is a woman who was left by her mother at a brothel – this is where she grew up.  No surprise that this is the direction her life took as well – she knew no other way.  She tried though, she had always wanted to be a singer but a young black girl – well, let’s just say it was assumed by many that she was anything but a singer.  It broke my heart to read of Sugar’s struggles.  Really she never had a chance with her upbringing and the times that this story takes place.

At first when Peal and Sugar come together there are some fireworks.  Sugar has been hurt by pretty much everyone in her life; she’s not open to new friendships.  Then again she’s never met someone like Pearl who just doesn’t give up.  Plus there’s this one big thing – Sugar reminds Pearl of her daughter Jude.  Over some time these women start to share their thoughts and feelings and in doing this, they are brought together in friendship.

It’s interesting to read just how cruel people can be.  Yes Sugar was a prostitute and I can well imagine that most women wouldn’t want her around their husbands but it still hurt me to read how they treated her.  I guess it’s because as a reader I had the background story on Sugar and could feel these sympathies.  Pearl however saw past that.  Now that’s not to say she agreed with what Sugar did  but she looked past the outer shell to the vulnerable person Sugar was inside and taught her that people could love her for who she was.  In turn, Sugar taught Pearl to live again; to be happy.

The novel Sugar just celebrated it’s 10th anniversary in January of this year.  I am surprised that I had never heard of it before but I have to say that I feel grateful now having had the opportunity to read this novel.  There is also a sequel to Sugar called This Bitter Earth which I intend to read soon.  Sugar is a novel of tragedy, love, loss, forgiveness and to me, most of all, friendship.  It’s well worth reading!  Again, just as a note there is blunt language and graphic sexual content but I have to say at the same time, that in many ways, that’s what makes this novel real in what is the tragedy of life for some.

Be sure to check out Bernice McFadden’s website for information on all of her novels.

I’m happy to say that courtesy of the author Bernice McFadden and the publisher, I have 3 copies of Sugar to share with my readers.  All you have to do…

My thanks…to me – I bought my own copy of Sugar.