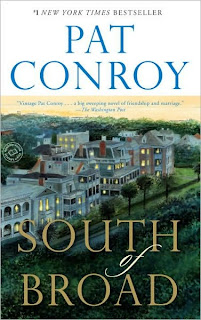 Today I was to have posted my review of South of Broad by Pat Conroy for his blog tour with TLC Book Tours but due to personal issues I am unable to. Lisa at TLC Book Tours was kind enough to agree to a book spotlight today and my review at a later date for which I am grateful. I have started the book and was enjoying it, just haven’t been reading a lot these past days. I’m sure when I get back to it, I will once again be drawn into the story. I certainly love the vivid descriptions of the Charleston area – it sounds so wonderful.

Against the sumptuous backdrop of Charleston, South Carolina, SOUTH OF BROAD gathers a unique cast of sinners and saints. Leopold Bloom King, our narrator, is the son of an amiable, loving father who teaches science at the local high school. His mother, an ex-nun, is the high school principal and a well-known Joyce scholar. After Leo’s older brother commits suicide at the age of thirteen, the family struggles with the shattering effects of his death, and Leo, lonely and isolated, searches for something to sustain him. Eventually, he finds his answer when he becomes part of a tightly knit group of high school seniors that includes Sheba and Trevor Poe, glamorous twins with an alcoholic mother and a prison-escapee father; hardscrabble mountain runaways Niles and Starla Whitehead; socialite Molly Huger and her boyfriend, Chadworth Rutledge X; and an ever-widening circle whose liaisons will ripple across two decades — from 1960s counterculture through the dawn of the AIDS crisis in the 1980s.
The ties among them endure for years, surviving marriages happy and troubled, unrequited loves and unspoken longings, hard-won successes and devastating breakdowns, and Charleston’s dark legacy of racism and class divisions. But the final test of friendship that brings them to San Francisco is something no one is prepared for. SOUTH OF BROAD is Pat Conroy at his finest, a long-awaited work from a great American writer whose passion for life and language knows no bounds.

This novel sounds like a great book club book pick and it just so happens that there is even a Reading Guide to help you and your book club along in your discussions.

Pat Conroy was born on October 26, 1945, in Atlanta, Georgia, to a young career military officer from Chicago and a Southern beauty from Alabama, whom Pat often credits for his love of language. He was the first of seven children.

His father was a violent and abusive man, a man whose biggest mistake, Conroy once said, was allowing a novelist to grow up in his home. Since his family had to move many times to different military bases around the South, Conroy changed schools frequently, finally attending the Citadel Military Academy in Charleston, South Carolina, upon his father’s insistence. While still a student, he wrote and then published his first book, The Boo, a tribute to a beloved teacher.

After graduation, Conroy taught English in Beaufort, where he met and married a young woman with two children, a widow of the Vietnam War. He then accepted a job teaching underprivileged children in a one-room schoolhouse on Daufuskie Island off the South Carolina shore. After a year, Conroy was fired for his unconventional teaching practices – such as his refusal to allow corporal punishment of his students – and for his personal differences with the school’s administration. Conroy evened the score by exposing the racism and appalling conditions his students endured with the publication of The Water is Wide in 1972. The book won Conroy a humanitarian award from the National Education Association and was made into the feature film Conrack, starring Jon Voight.

Following the birth of a daughter, the Conroys moved to Atlanta, where Pat wrote his novel, The Great Santini, published in 1976. This autobiographical work, later made into a film starring Robert Duvall, explored the conflicts of the author’s childhood, particularly his ambivalent love for an abusive and often dangerous father.

The publication of a book that so painfully exposed his family’s secret brought Conroy a period of tremendous personal desolation. This crisis resulted not only in his divorce, but the divorce of his parents; his mother presented a copy of The Great Santini to the judge as “evidence” in divorce proceedings against his father.

The Citadel became the subject of his next novel, The Lords of Discipline, published in 1980. The novel exposed the school’s harsh military discipline, racism, and sexism. This book, too, was made into a feature film.

Conroy remarried and moved from Atlanta to Rome, where he began The Prince of Tides, which, when published in 1986, became his most successful book. Reviewers immediately acknowledged Conroy as a master storyteller and a poetic and gifted prose stylist. This novel has become one of the most beloved novels of modern time; with over five million copies in print, it has earned Conroy an international reputation. The Prince of Tides was made into a highly successful feature film directed by and starring Barbra Streisand, as well as actor Nick Nolte, whose brilliant performance won him an Oscar nomination.

Beach Music (1995), Conroy’s sixth book, was the story of Jack McCall, an American who moves to Rome to escape the trauma and painful memory of his young wife’s suicidal leap off a bridge in South Carolina. This book, too, has been a tremendous international bestseller.

While Conroy was on tour for Beach Music, members of his Citadel basketball team began appearing, one by one, at his book signings around the country. When his then-wife served him divorce papers while he was still on the road, Conroy realized that his team members had come back into his life just when he needed them most. He began reconstructing his senior year, his last year as an athlete, and the 21 basketball games that changed his life. The result of these recollections, along with flashbacks of his childhood and insights into his early aspirations as a writer, became My Losing Season, Conroy’s seventh book and his first work of nonfiction since The Water is Wide.

South of Broad, Conroy’s fifth novel and ninth book, presents readers with a Conroy first: a totally lovable father for Leo Bloom King, the story’s central figure. The book is not only a love letter to the city of Charleston; it is a celebration of lifelong friendship.

Courtesy of the publisher I have 1 paperback copy of South of Broad by Pat Conroy to share with one of my readers. To enter…

This giveaway is open to US & Canadian residents only (no PO boxes) as the book will be sent to you directly from the publisher. I will draw for the winner on Saturday, May 29, 2010. Good luck everyone! If you just can’t wait for your own copy you can purchase one here in the US and here in Canada.