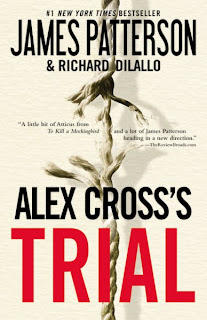 I’ve got a great giveaway for you courtesy of Valerie at Hachette Book Group.  It’s for 3 copies of Alex Cross’s TRIAL by James Patterson & Richard DiLallo.  I have not read this yet but who can pass up on a James Patterson book?

From his grandmother, Alex Cross has heard the story of his great uncle Abraham and his struggles for survival in the era of the Ku Klux Klan. Now, Alex passes the family tale along to his own children in a novel he’s written–a novel called Trial.

As a lawyer in turn-of-the-century Washington D.C., Ben Corbett represents the toughest cases. Fighting against oppression and racism, he risks his family and his life in the process. When President Roosevelt asks Ben to return to his home town to investigate rumors of the resurgence of the Ku Klux Klan there, he cannot refuse.

When he arrives in Eudora, Mississippi, Ben meets the wise Abraham Cross and his beautiful granddaughter, Moody. Ben enlists their help, and the two Crosses introduce him to the hidden side of the idyllic Southern town. Lynchings have become commonplace and residents of the town’s black quarter live in constant fear. Ben aims to break the reign of terror–but the truth of who is really behind it could break his heart. Written in the fearless voice of Detective Alex Cross, Alex Cross’s Trial is a gripping story of murder, love, and, above all, bravery.

James Patterson is one of the bestselling writers of all time, with more than 170 million copies of his books sold worldwide. He is the author of the two most popular detective series of the past decade, featuring Alex Cross and the Women’s Murder Club. He has won an Edgar Award–the mystery world’s highest honor–and his novels Kiss the Girls and Along Came a Spider were made into feature films.

His lifelong work to promote books and reading is reflected in his new Web site, ReadKiddoRead.com, which helps parents, grandparents, teachers, and librarians find the very best children’s books for their kids. He lives in Florida.

Richard DiLallo is a former advertising creative director. He has had numerous articles published in major magazines. He lives in Manhattan with his wife.

I have 3 copies of Alex Cross’s TRIAL by James Patterson to share with my readers.  To enter…

This giveaway is open to US & Canadian residents only (no PO boxes) as the books will be coming directly from the publisher.  I will draw for the winners on  Sunday, May 2, 2010.  Good luck everyone!