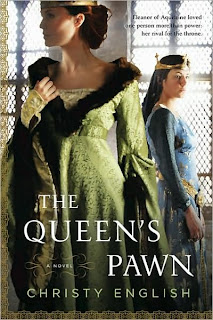 Welcome to Peeking Between the Pages Christy! It’s a pleasure to have you here today. Christy English is the author of The Queen’s Pawn which released on April 6, 2010. I had intended to have my review post today but circumstances prevented me from finishing it as I had hoped. So I’m going to post the guest post/giveaway today and my review hopefully Friday. I can say though that the book is fantastic so far and I hated not having a chance to pick it up and keep reading! Let’s see what Christy has to say about…Location and Inspiration: Writing at the Cloisters…

The Cloisters is an extension of the Metropolitan Museum of Art in New York, a separate branch that holds much of the museum’s medieval collection. It is a place of beautiful art, flowering trees, and square colonnades, or cloisters, where water runs in fountains all through the spring and summer, giving the visitor an oasis of peace in the midst of Manhattan’s constant motion. 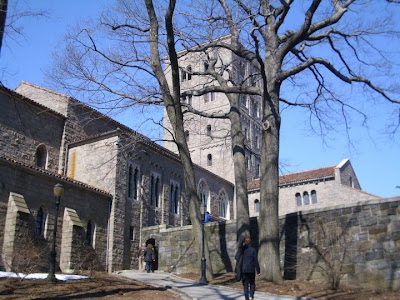 The Cloisters is where I first wrote the outline for THE QUEEN’S PAWN, a novel about Eleanor of Aquitaine and Princess Alais of France. In one of the museum’s three outdoor cloisters, Alais and I settled down to work out the details of THE QUEEN’S PAWN. Writing a synopsis can be as much work for me as writing the novel itself, but the soothing, tranquil atmosphere of the museum relaxed me and gave me a feeling for the kind of religious devotion that sustained Alais throughout her childhood and for much of her life. 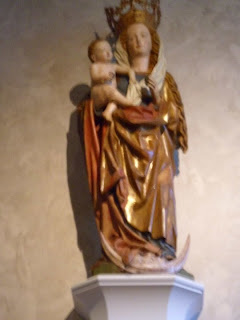 This statue of the Holy Mother and the Christ child, while from a later period, gives you a good idea of the kind of art Alais loved. The character as she developed on the pages of my novel has a deep devotion to the Church. She is especially drawn to the Virgin Mary, who serves as an aid and comfort to her during the dark, lonely days of her childhood, and later, after the events of THE QUEEN’S PAWN have drawn to a close

The Cloisters is full of such beauty, objects of devotion and shaded colonnades of tranquility. As I wrote, I felt as if I was given a window into Alais’ time in her own cloister, when she was able to escape the political tumult of her life, and spend her time in contemplation and prayer. I would have written the book without the Cloisters to shelter me, but the experience would not have been nearly as rewarding. I am grateful to the museum for creating such a place of serenity where, as with THE QUEEN’S PAWN, we can seek a window into the past.

Thank you so much for the wonderful post Christy. I would love to visit the Cloisters. It sounds like a beautiful place for writing.
__________

A historical novel of the legendary Eleanor of Aquitaine and the one person she loved more than power-her rival for the throne.

At only nine, Princess Alais of France is sent to live in England until she is of age to wed Prince Richard, son of King Henry II and Queen Eleanor of Aquitaine. Alais is an innocent pawn on the chessboard of dynastic marriage, her betrothal intended to broker an uneasy truce between the nations.

Estranged from her husband, Eleanor sees a kindred spirit in this determined young girl. She embraces Alais as a daughter, teaching the princess what it takes to be a woman of power in a world of men. But as Alais grows to maturity and develops ambitions of her own, Eleanor begins to see her as a threat-and their love for each other becomes overshadowed by their bitter rivalry, dark betrayals, conflicting passions, and a battle for revenge over the throne of England itself.

About the Author (from Christy English’s blog) 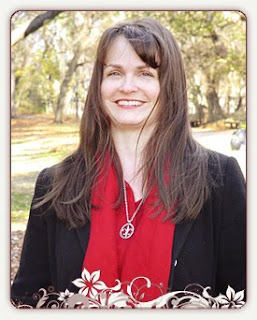 I am a writer of historical fiction centering on Eleanor of Aquitaine, Alais of France, and the Plantagenets of the 12th Century. Look for my novel THE QUEEN’S PAWN from the New American Library, an imprint of Penguin.

My second novel, about Eleanor of Aquitaine’s marriage to Louis VII of France, TO BE QUEEN, will be published by the New American Library in April 2011.

I have 1 copy of The Queen’s Pawn courtesy of the publisher to share with US residents only and I will offer up my very gently read copy to everyone! So, that’s 2 copies up for grabs! To enter…