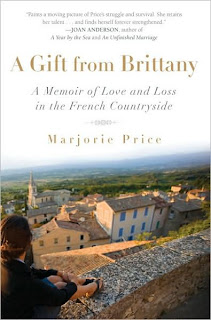 Please join me in welcoming Marjorie Price, author of A Gift from Brittany: A Memoir of Love and Loss in the French Countryside, to Peeking Between the Pages. I really enjoyed A Gift from Brittany (my review here). I loved the story and the descriptions of the time and place – it takes you to another world for a while. Marjorie has joined us today with a guest post entitled Fields of Hesitation…

Although I have written children’s books, short stories, poetry and most recently a memoir (A Gift from Brittany), I have always been a painter. Long before Women’s Lib, when most young women’s aspirations were zeroed in on finding a husband, I worked as a secretary in television, got up at 5:00 in the morning to go sketching, attended art classes in the evenings, and dreamed of going to France to paint. No one in my family had encouraged me in either painting or writing; I had no mentor to guide me.

In my early twenties, while dealing with the disappointment of galleries rejecting my paintings, my father, whom I dearly loved, offered well-meaning advice. For my own good, he said, I should give up trying to be a painter. I was wasting my time submitting work that was so personal; unless I studied the marketplace and created work that fit into what galleries were selling, I would never be successful. Somehow, much as I respected him, I knew these words were not for me.

But other words came across my path from time to time, words that struck my fancy, words like lighthouses in a stormy sea as I struggled to navigate my way through life. I encountered one of the most powerful phrases when, near the end of a speech, Adlai Stevenson quoted the following words:

“On the fields of hesitation bleach the bones of those who rested on the eve of victory, and resting — died.”

I stopped everything. I scribbled them down. I repeated them over and over as they etched an indelible image in my mind of endless fields rendered pale and lifeless by strewn about remnants of abandoned dreams. Were they my dreams?

In 1960, I saved my money and went to France. There, I met and married an exciting French painter, reinforcing my belief that my destiny was to become a painter. But several years later, my seemingly idyllic marriage unraveled, especially when my husband ordered me to stop painting and devote myself entirely to his career. I was devastated. Not only had my family, but also the man I loved opposed my becoming a painter. The day I left him, I brought my painting materials and my dreams back into the light of day.

Several years ago, when I was submitting A Gift from Brittany, my very personal memoir about those pivotal years in France, I found myself again dealing with rejection — this time, by literary agents. Around that time, although I don’t remember where, I came across these words:

My book found a literary agent who loved it and shortly after, a publisher, and when a show of my very personal paintings, the Bathers, was well-received and successful, I gratefully came across another phrase in a beautiful book, Twenty-Eight Artists and Two Saints, by Joan Acocella. To paraphrase, it read:

“Achievement is thanks not to the illusive muse or to genius, but to old-fashioned Sunday School virtues such as tenacity and the ability to survive rejection.”

These words immediately joined the other beacons of light. Not that they have led me to safe and secure paths, but they’ve helped me to weather the true paths —those that were mine alone to follow.
_________

Marjorie, thank you so much for sharing that very heartfelt and personal guest post with us. I, for one, am very glad your memoir was published and wish you every success in the future whether it be in your painting or in writing another novel!
__________

This is Midge’s story—A young and footloose artist from Chicago travels to Paris in 1960 to paint. Dazzled by everything French, she falls in love and marries Yves, a handsome and volatile French painter. What happens next gives her adventure a deeper meaning.

Midge and Yves buy half of a remote hamlet, deep in the French countryside, called La Salle, where they plan to spend their summers and where the peasants (whose lives have changed little since the Middle Ages) still speak an ancient language named Gallo. There, Midge encounters a world she never knew existed. Stepping back in time, she finds herself surrounded by people who are more like her ancestors than her contemporaries. As Midge’s seemingly idyllic marriage begins to unravel, she turns to Jeanne Montrelay, an elderly peasant woman, who lives in the nearest farm across the road. Jeanne is 68, illiterate, and has three cows to her name. She dresses in black, wears the low, white lace coif of the Morbihan, and has never left the village. Midge’s and Jeanne’s differences are staggering, yet they forge a friendship and transform each others’ life.

A Gift from Brittany is about two memorable relationships: one that tests strength; another that restores it. It takes the reader into a world that was once the heart of rural France – a world that has disappeared – and brings it to life again. 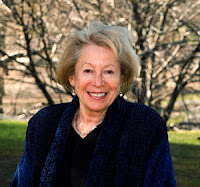 Marjorie Price was born in Chicago, Illinois. After receiving a B.A. in Speech and Drama (1951) from Stanford University, she returned to Chicago and studied painting and design at the Chicago Art Institute. In 1953 she made her first trip to Europe. She remained there for six months, attending art classes at the Grande Chaumiére in Paris. On her return to the United States, she settled in San Francisco and studied painting at the San Francisco Art League. From 1953 to 1960, she worked in television, continued to paint, and indulged her love of theater by acting in regional theater. In 1960, she again left America for France, living first in Paris and then on a farm in Brittany which she restored and where she created an art center called the “Centre d’Art de la Salle” where painters, sculptors and ceramists came from various parts of France to exhibit their work. In 1970, she moved to Rome, Italy with her daughter Danielle. In 1978, after eighteen years in Europe, she returned to the United States and settled in New York. Her work is represented in numerous private and public collections in the United States and Europe. Marjorie Price lives and works as a painter and author in New York City.
__________

I have 1 copy of A Gift from Brittany by Marjorie Price courtesy of the publisher Gotham Books to share with one of my readers. To enter…

This giveaway is open to US & Canadian residents only (no PO boxes) as the book will be shipped to you directly from the publisher. I will draw for the winner on Saturday, May 15, 2010. Good luck everyone!