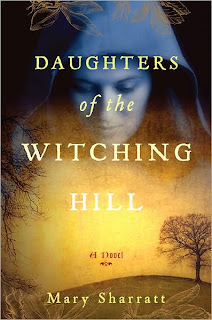 Let’s all welcome Mary Sharratt, author of Daughters of the Witching Hill to Peeking Between the Pages today. I reviewed Mary’s novel yesterday (my review) and I really found it fascinating to read about the Pendle Witches. Let’s sit back and relax and enjoy Mary’s guest post entitled In Search of the Pendle Witches...

The wild, brooding landscape of Pendle Hill in Lancashire, my home for the past seven years, gave birth to my new novel, Daughters of the Witching Hill, which tells the true story of the Pendle Witches.

In 1612, seven women and two men from Pendle Forest were executed for witchcraft, but the most notorious of the accused, Bess Southerns, aka Old Demdike, cheated the hangman by dying in prison. This is how Thomas Potts describes her in The Wonderfull Discoverie of Witches in the Countie of Lancaster:

She was a very old woman, about the age of Foure-score yeares, and had
been a Witch for fiftie yeares. Shee dwelt in the Forrest of Pendle, a vast
place, fitte for her profession: What shee committed in her time, no man
knowes. . . . Shee was a generall agent for the Devill in all these partes: no
man escaped her, or her Furies.

Reading the trial transcripts against the grain, I was amazed at how Bess’s strength of character blazed forth in the document written to vilify her. Bess freely admitted to being a healer and a cunning woman. She lived as a matriarch with her family at Malkin Tower and instructed her daughter and granddaughter in the ways of magic. Her neighbors called on her to cure their children and their cattle. What fascinated me was not that Bess was arrested on witchcraft charges but that the authorities turned on her only near the end of her long, productive career. She practiced her craft for decades before anybody dared to interfere with her.

Cunning craft—the art of using charms to heal both humans and livestock—was Bess’s family trade. Their spells, recorded in A Wonderfull Discoverie, were Roman Catholic prayer charms—the kind of folk magic that would have flourished before the Reformation. Yet she also drew on an even older source of power: Tibb, her familiar spirit, who appeared to her in the guise of a beautiful young man.

Other books have been written about the Pendle Witches—both nuanced and lurid. Mine is the first to tell the tale from Bess’s point of view. I longed to give Bess Southerns what her world denied her—her own voice.

History is a fluid thing that continually shapes the present. As a writer, I am obsessed with how the true stories of our ancestors haunt the landscape. No one in Pendle can remain untouched by the witches’ legacy. As contemporary British storyteller, Hugh Lupton, has said, if you go deep enough into the old tales and can present them in a meaningful way to a modern audience, you become the living voice in an ancient tradition. Mother Demdike’s voice deserves to be heard.

Long after their demise, Bess Southerns and her fellow witches endure, their spirit woven into the land, its weft and warp, like the stones and the streams that cut across the moors. This is their home, their seat of power, and they shall never be banished. By learning their story, I have become an adopted daughter of their living landscape, one of many tellers who spin their unending tale.
__________

Mary, thank you so much or this wonderful guest post. I too found it interesting that they went after Bess at the end of her career instead of early on. My heart broke for, that at her age, she had to endure all that she did.
_________

Daughters of the Witching Hill brings history to life in a vivid and wrenching account of a family sustained by love as they try to survive the hysteria of a witch-hunt.

Bess Southerns, an impoverished widow living in Pendle Forest, is haunted by visions and gains a reputation as a cunning woman. Drawing on the Catholic folk magic of her youth, Bess heals the sick and foretells the future. As she ages, she instructs her granddaughter, Alizon, in her craft, as well as her best friend, who ultimately turns to dark magic. When a peddler suffers a stroke after exchanging harsh words with Alizon, a local magistrate, eager to make his name as a witch finder, plays neighbors and family members against one another until suspicion and paranoia reach frenzied heights.

Sharratt interweaves well-researched historical details of the 1612 Pendle witch-hunt with a beautifully imagined story of strong women, family, and betrayal. Daughters of the Witching Hill is a powerful novel of intrigue and revelation.

Mary Sharratt is an American writer who has lived in the Pendle region of Lancashire, England for the past seven years. Her inspiration for her forthcoming novel, Daughters of the Witching Hill (Houghton Mifflin Harcourt, Spring 2010), arose directly out of the wild, brooding landscape: the story of the Pendle Witches unfolded almost literally in her backyard.

Winner of the 2005 WILLA Literary Award and a Minnesota Book Award Finalist, Mary is the author of the critically acclaimed novels Summit Avenue (Coffee House 2000), The Real Minerva (Houghton Mifflin 2004), and The Vanishing Point (Houghton Mifflin 2006). Her first two novels were Book Sense picks, and The Vanishing Point was a UK Guardian Readers’ Book of the Year. She is also the co-editor of the subversive UK fiction anthology, Bitch Lit (Crocus Books UK 2006), a celebration of female anti-heroes which was featured in The Guardian and on BBC Radio 4’s Women’s Hour. Mary’s short stories have been widely published in journals and anthologies on both sides of the Atlantic, including the recent Twin Cities Noir (Akashic Books 2006).

When Mary isn’t writing fiction, she is usually off riding Boushka, her beautiful and spirited Welsh mare who is making a cameo appearance in Daughters of the Witching Hill as Alice Nutter’s horse.

Mary returns regularly to her hometown of Minneapolis, Minnesota where she teaches workshops at The Loft Literary Center.

“The thing that gets me most excited is coaching my students on the power of story, the art of drawing the reader into the thick of the narrative. My job is helping my students discover the stories they need to tell and helping them develop their narrative voice. Then I stand back and listen to their stories unfold, spinning themselves on their own power.”

I have 1 copy of Daughters of the Witching Hill by Mary Sharratt courtesy of the publisher to share with one of my lucky readers. To enter…

This giveaway is open to US & Canadian residents only (no PO boxes) and I will draw for the winner on Saturday, May 15, 2010. Good luck everyone!