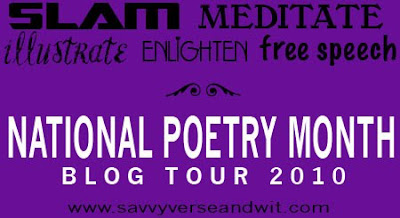 April is National Poetry Month and we’re celebrating it! Serena from Savvy Verse & Wit has organized the National Poetry Month Blog Tour of which I’m pleased to be a part of. I’m not an expert when it comes to poetry but I do know what I like when I read it. Initially I was supposed to read a poetry book and review it but due to personal issues I was unable to. Serena, wonderful person that she is, introduced me to Bernadette Geyer who I’m pleased to welcome to Peeking Between the Pages today with a guest post. I’ve been poking around Bernadette’s website and found some wonderful online poems of which I’ll share my favorite with you later on but I have to say I will definitely seek out more of her work. Let’s relax and see what Bernadette has to say about how the ACT of gardening parallels the act of coaxing a poem from final draft to final state…It really is a wonderful guest post! Thank you Bernadette!

It’s lucky happenstance for me that NaPoWriMo coincides with early springtime. I am an avid gardener – both by choice and by necessity – and find much inspiration from the act of tending to the yard. But, gardening doesn’t only influence my poetry thematically. I see many parallels between the ACT of gardening and the act of coaxing a poem from draft to final state.

For instance, when I’m laying grass seed, I understand that “overseeding” is necessary because not all of the seeds will sprout. The same thing with drafting poems. You might need to draft 100 in order to find ten that bloom for you. This year, I also attempted to write a poem every day during the month of February. Including the work created during NaPoWriMo, I should have nearly 60 poem drafts by May 1st! Even if only one tenth of the drafts are promising, that gives me six poems to focus on for the next few months – editing and revising to cultivate each poem’s potential.

A few years ago, I finally got frustrated with an overgrown bush on the side of my driveway. Dead branch ends poked out from between the light green sprigs of new growth. The whole bush lacked any semblance of having ever been “shaped.” I began to cut away at it, initially with the notion that I would eventually prune it all the way down to the ground, dig it up and have the garbage men take it away on debris removal day. But, as I removed the dead branches, I realized the thicker, living interior branches actually had a lovely structure of their own. I began removing lower branches, exposing that interior structure of the bush and leaving the healthy green cap of the upper branches. It was like bonsai on a very large scale.

I saw the relevance of this pruning method to poem drafts. A friend of mine once told me she like to overwrite her poems, getting down on paper as much information as she could related to whatever she was writing about – pulling in obscure details and tangential thoughts. Once everything was there, she then had the raw material to work with, excising what was unnecessary to the poem, revealing the true shape of the poem, I think, in the way sculptors chip away at a hunk of marble to get rid of everything that isn’t the statue trapped within the stone.

And so, for the rest of April, I will continue scattering letters and words like seeds across pages and pages of my journal. Later, I will return to the landscape with my gloves on, pruning shears and trowel in hand, ready for the real work to begin.

Bernadette Geyer is the author of a poetry chapbook, What Remains, and the recipient of a 2010 Strauss Fellowship from the Arts Council of Fairfax County. Her poems have appeared in Los Angeles Review, Hotel Amerika, The Midwest Quarterly and elsewhere. She works as a freelance writer and editor in the Washington, DC, area. Her blog can be found at http://bernadettegeyer.blogspot.com. 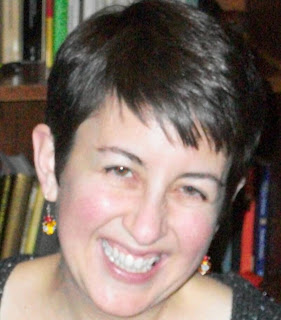 BERNADETTE GEYER is a poet and freelance writer/editor in the Washington, DC, area.

Her poetry chapbook, What Remains, was published in 2001 by Argonne House Press. Geyer is the recipient of a 2010 Strauss Fellowship from the Arts Council of Fairfax County. Her poetry has appeared in Hotel Amerika, Los Angeles Review, The Midwest Quarterly, 32 Poems, The Evansville Review, and other literary journals.

She pulls the thread gently
along the seam of chiffon,

the pricking of the needle
has opened a rift in the sky,

and memories move deftly
in and out of the fabric.

At last, the movement
becomes the memory

as the pattern, already laid out,
takes its shape in the cloth,

and she sees the future,
a glint of light projected

in the incessant steel of her
strobe-like and fleeting needle.

Wow, this poem speaks to me! I love it! Just beautiful! Thank you so much for joining us at Peeking Between the Pages today Bernadette. I really am looking forward to reading more of your work! Be sure to visit Bernadette’s website and blog to learn more about her work and you can check out an interview she did with Serena over at Savvy Verse & Wit here.

Check out all the tour stops on the National Poetry Month Blog Tour here on Serena’s blog.