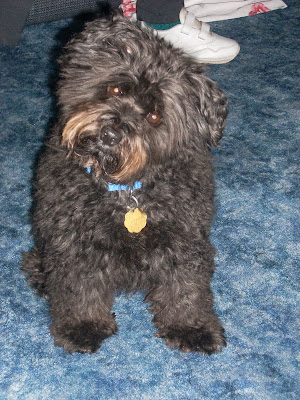 Hi everyone, I thought I’d give you an update on Buddy and his tests. He had his ultrasound yesterday and thankfully there are no tumors or obvious signs of cancer although the vet says this does not mean there is no cancer. There are signs of infection though and they have sent off a culture to be tested for several scary sounding diseases that dogs can get. There is one that I’m praying extra hard he doesn’t have because there is no help for it. This one can only be determined by a biopsy which will be next on the list if the culture shows nothing.

Anyhow my poor boy cried his heart out during the ultrasound. I’ve never heard him cry like that before and it broke my heart. I almost barged in there but I knew I would only make things worse. The girl working at the vets said it was only his whining cry, not a pain one. Buddy doesn’t like being on his back and he had to be on his back and they shaved his tummy. Those are two things that just wouldn’t have gone over well. Besides that he was probably scared silly. The technician and his assistant were really nice though and they actually said he had been a good boy. I told them it sounded like he was being killed, not being good. I felt horrible for putting him through that even though I know it was for the best.

Now we wait. I’ll likely hear the results from the culture on Tuesday and we will go from there. Buddy’s liver is still enlarged which is also not good but the vet said that something going wrong in one organ can affect another. I just pray that whatever we find out is something that can be maintained and that he will still be with me for a long time. My mind can’t allow any other thought right now without going completely crazy.

I thank all of you for your kind comments and prayers and those of you who have emailed me privately I love you all for your concern. I’m grateful for all those praying for Buddy and please keep those prayers coming – he still really needs them.