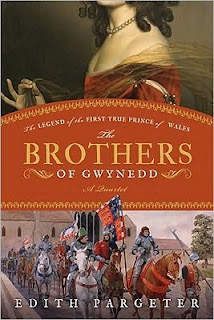 I’m participating in a Summer Reading Group with a few bloggers that was arranged by Sourcebooks. The selection we’re reading is The Brothers of Gwynedd by Edith Pargeter. It’s quite the chunkster of a book at 800 and some pages but thankfully it is made up of four books and we are reading them over the course of four months. The first section is entitled Sunrise in the West and that is what this review is based on.

Sunrise in the West is the first book and is based on the four brothers of Gwynedd but this part focuses mostly on Llewelyn,the last prince of Wales and the second born son of Lord Griffith. The other brothers are Owen, Rhodri and David. This first part of the book is really setting the scene for us and introducing all the characters.

The book starts with Lord Griffith being imprisoned with his eldest son Owen. His wife Senena then leaves with her two younger sons, Rhodri and David, to go to King Henry to bargain for their release. However, her son Llewelyn, even after being ordered by his mother to come with them, manages to disappear at the last minute. She is forced to leave without him.

Llewelyn refuses to leave his home. He wants to stay and fight for what is his alongside his uncle David. He is spotted though by a young boy but by silent consent they both agree to never tell that they saw each other. This young boy turns out to be Samson who has been a childhood friend to all the boys as his mother was in service to Senena. This loyalty between Llewelyn and Samson ends up extending all the way into adulthood. This first section of the book is also narrated by Samson.

After their father dies the boys are all brought together again. Llewelyn has been ruling over Wales all the while they were gone but the council decides that it would be best if the two older brothers work together to keep peace. The two younger brothers, Rhodri and David, are given substantial lands to rule over. Unfortunately it isn’t enough to keep them happy and instead of working together to gain control over King Henry, they fight amongst themselves instead. Eventually this all simmers down and they band together to go against the King. The next battle is to tackle King Henry and get Wales back under Welsh rule.

While there are a lot of beautiful passages in this novel…

‘She looked up at him out of the cushions and skins that cradled her, and the heavy lids rolled back from her eyes, that were like violets, if violets could be lighted by candles within them. Her face was suddenly so still and so pale that for a moment she ceased to breathe, and all her bones shone white through the skin, as though smitten by frost.’ (pg 201, eBook)

…it is also quite difficult to read at times. It’s classed as fiction but truthfully I felt as though I was reading a history text at times. What I’m finding is that most of the novel thus far is really lacking in any warmth or emotion. I like the narrator, Samson. He seems to be a good man who stays loyal to those important to him but it’s just like he’s doling out facts with not a lot of anything else. At times there are certain parts of the story that are being told that are interesting and it is for those that I keep reading.

Check back next month for the next installment in The Brothers of Gwynedd, Dragon at Noonday.