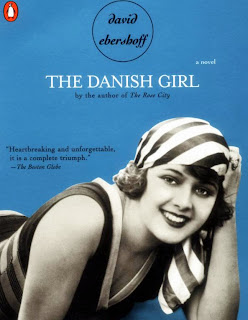 The Danish Girl by David Ebershoff is a book inspired by a true story. It is about Danish painter Einar Wegener and his struggle with his gender – he is the first man in history to undergo gender reassignment surgery. It is also a true love story in the acceptance and support that Einar’s wife Greta gave him continually. Ironically enough it is Greta who sets the ball rolling when she asks Einar to pose for her in stockings and women’s shoes for a portrait she was doing and awakens a deep desire in her husband to be a woman and Lili begins to emerge.

This story takes place in the 1920’s when things like gender reassignment was simply not spoken about. Greta and Einar have been married for over six years when this incident takes place and forever changes both of their lives. Einar had always been ‘pretty’ to Greta. She makes several statements that give us an idea of Einar’s femininity…

He was quite obviously pretty and feminine man. I often wondered about the attraction that Greta had for Einar. They seemed like such an unlikely couple and yet loved each other deeply. Greta, after having Einar dress in the women’s clothes, recognizes that her husband really enjoyed playing dress up. For her part, she greatly encourages Einar in picking out women’s clothes and going out in public as a woman. Why she did it – I’m not sure. She states more than once she just wants Einar to be happy. What Greta did have was a very unselfish love for Einar. She accepted and encouraged the changes in her husband. When he would ask if Lili could come for a visit she would agree and often would ask herself if Lili wanted to go out.

Einar was a girl born as a boy. He felt that there was another person that existed within him and that was Lili. Einar was very confused in the beginning and I think he felt such shame. It wasn’t ‘normal’ for men to want to dress as women and to take it even further – be a woman. The more Einar became Lili; the more he believed that this was how it was supposed to be.

Greta amazed me. In her shoes I don’t think I would have reacted the same way she did or been anywhere near as supportive as she was. I think it’s a testament to how much she loved Einar and later Lili. Once Lili came into existence though their relationship was forever changed. Lili was interested in men; as a matter of a fact really had been his/her whole life but had mostly been deeply confused about it as a younger boy.

When Einar finally begins his transformation to Lili it is a dream come true for him. He can finally begin to live his life as he wants – as a woman with the right parts. You have to remember that at the time Einar had this done it was the 1920’s. Needless to say when news broke out about this, it was huge. Lili had to undergo many painful surgeries yet seemed to keep fairly positive through the haze of great pain as she got closer and closer to her goal.

I didn’t connect at all with Greta but I found Einar/Lili and the subject of gender reassignment fascinating. How awful it must be to live in a body you just know isn’t right – to know that there is another somebody living inside of you just yearning to come out and live. I did however respect the love and commitment that Greta had for her husband. She put his needs ahead of her own and helped him to realize his dream of becoming Lili.

People interested in the topic of gender reassignment would find this book interesting and even those who enjoy a deeply emotional story. At times I found the writing a bit disjointed but the subject matter of the story and me wanting to know how everything turns out for Lili kept me turning the pages quickly. I read The Danish Girl by David Ebershoff for his book tour with TLC Book Tours. As a point of interest The Danish Girl is being made into a major motion picture with Nicole Kidman as Einar/Lili and Charlize Theron as Greta. I think this would make a good movie and I’d be interested in seeing it.

You can buy The Danish Girl by David Ebershoff here in the US and here in Canada. Be sure to pop by David’s website for more information on The Danish Girl and to see more of his work. You can also check out more tour stops for The Danish Girl here.

My thanks…to Lisa at TLC Book Tours and the publisher for my review copy of The Danish Girl by David Ebershoff.

I have 1 copy of The Danish Girl by David Ebershoff up for grabs. To enter…

This giveaway is open to US and Canadian residents only (no PO boxes) as the book will be coming to you directly from the publisher. I will be drawing for the winner on Saturday, May 29, 2010. Good luck everyone!