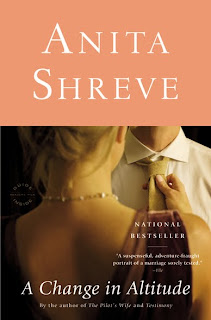 Another great giveaway for you all! I’ve got 3 copies of A Change in Altitude by Anita Shreve up for grabs courtesy of Valerie with Hachette Book Group. I have read many of Anita Shreve’s books and have read this one as well (my review here). While not one of my favorites, it was still good. I do think that there is a multitude of topics for a book club to ponder on in this novel from marriage and fidelity to forgiveness – Hachette Book Group has even provided a Reading Group Guide to help you along.

Margaret and Patrick have been married just a few months when they set off on what they hope will be a great adventure-a year living in Kenya. Margaret quickly realizes there is a great deal she doesn’t know about the complex mores of her new home, and about her own husband.

A British couple invites the newlyweds to join on a climbing expedition to Mount Kenya, and they eagerly agree. But during their harrowing ascent, a horrific accident occurs. In the aftermath of the tragedy, Margaret struggles to understand what happened on the mountain and how these events have transformed her and her marriage, perhaps forever.

A Change in Altitude illuminates the inner landscape of a couple, the irrevocable impact of tragedy, and the elusive nature of forgiveness. With stunning language and striking emotional intensity, Anita Shreve transports us to the exotic panoramas of Africa and into the core of our most intimate relationships.

ANITA SHREVE began writing fiction while working as a high school teacher. Although one of her first published stories, “Past the Island, Drifting,” was awarded an O. Henry Prize in 1975, Shreve felt she couldn’t make a living as a fiction writer so she became a journalist. She traveled to Africa, and spent three years in Kenya, writing articles that appeared in magazines such as Quest, US, and Newsweek. Back in the United States, she turned to raising her children and writing freelance articles for magazines. Shreve later expanded two of these articles — both published in the New York Times Magazine — into the nonfiction books Remaking Motherhood and Women Together, Women Alone. At the same time Shreve also began working on her first novel, Eden Close. With its publication in 1989, she gave up journalism for writing fiction full time, thrilled, as she says, with “the rush of freedom that I could make it up.”

Since Eden Close Anita Shreve has written eleven other novels: Strange Fits of Passion, Where or When, Resistance, The Weight of Water, The Pilot’s Wife, Fortune’s Rocks, The Last Time They Met, Sea Glass, All He Ever Wanted, Light on Snow, A Wedding in December and, most recently, Body Surfing. In 1998 Shreve received the PEN/L. L. Winship Award and the New England Book Award for fiction.

Check out Anita Shreve discussing A Change in Altitude

I have 3 copies of A Change in Altitude by Anita Shreve up for giveaway. To enter…

This giveaway is open to US & Canadian residents only (no PO boxes) as the books will ship to the winners directly from the publisher. I will draw for the winners on Sunday, May 30, 2010. Good luck to you all!