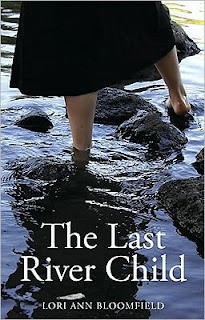 I’m really pleased to welcome author Lori Ann Bloomfield to Peeking Between the Pages today. I just finished reading her debut novel The Last River Child (my review) and I loved it! It has definitely been one of my favorites. Lori is joining is today with a guest post about her external and internal landscapes and how they influence her writing…

As a fiction writer I always have a view of two separate landscapes – the exterior one that surrounds me and the imaginary, interior one where my writing takes place. At the moment, my exterior landscape is the view from the window beside my desk in Toronto, Canada. Because Toronto is a mostly flat city and I live in a high rise with nothing blocking my view, I can, on a clear day like this one, see all the way to the horizon, which in a large city is unusual. 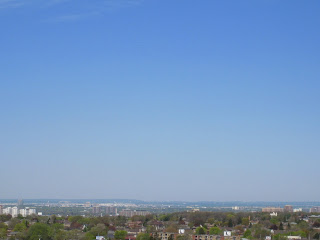 Today I can see the Niagara Escarpment, that bony ridge of land that juts up and runs across much of the province like a rocky spine. I like to hike there and know that it is a good hour-long drive at highway speeds from where I am sitting. Closer, but still on the outskirts of the city, I can see airplanes taking off and landing at Pearson International Airport. Closest to me, and spreading out directly below my window, is a residential neighbourhood. Perfect for what I, as a writer, call “human observation”. Others refer to this as spying.

It is one of the first warm days of spring so there is plenty to observe in the neighbourhood. A block away three roofers have taken off their shirts and are sunbathing instead of working. Occasionally one of the men will reach for his hammer and bang it for a few minutes on the half -shingled roof, pretending to work, before turning his attention back to his tan. I hope the owner of the house is not paying them by the hour. Down a lane and behind a garage two teenage boys are smoking. I notice that they rarely lift the cigarettes to their lips and am glad when they toss them away and begin practicing martial arts moves. Then I see the fat lady and her chihuahua emerge from their house. I have missed them. Over the winter months they have remained indoors, but today the warm temperatures have tempted them outside. As the woman lumbers down the sidewalk her head turns continually from side to side. She finds no one to talk to and is just about to go back inside when the postman turns down her street. Lingering on her porch, she waits for him. But the postman will not let himself be waylaid. He hands her the day’s mail and without pausing pivots sharply on one foot and walks briskly away. Only when he disappears around the corner at the end of the block does she pick up her little dog and go inside.

Truthfully, I am not spying as much as I am settling into the day’s writing. This letting my gaze wander over the external view before I turn my attention inward to locate the interior one is a bit like stretching before exercise. I am warming up my imagination. My interior view changes, according to what I am writing. Today I am trying to summon up a vaudeville theatre, long past its prime. When I wrote my first novel, “The Last River Child” my interior landscape was a small rural village in the early 20th century. Because it took seven years to write that book its landscape became especially real to me. I remember one day, after writing a scene that took place in summertime, I happened to glance out the window. Seeing a winter’s day in a bustling city almost a century later than when I was writing about was such a shock I actually felt a wave of vertigo.
Usually I don’t like it when my writing gives me nausea (it happens occasionally) but I was pleased that day. I knew that if the writing felt that real to me, it would feel real to a reader. And that’s all my job entails, actually. It is a simple task, though not simple to do. Using only words I try to build entire worlds so that I may share my view with readers.
_______

Thanks so much for this wonderful guest post Lori. It has been great having the opportunity to read your novel as well as having you guest post on my blog. I really look forward to reading more of your work in the future.
_______

About the Book (from Second Story Press)

In the summer of 1900 a meteorite lands on the day of Peg Staynor’s baptismal, barely missing the small church in rural Ontario. This, along with Peg’s almost colourless eyes, is enough to resurrect a local superstition that will haunt Peg and her family for years. Many believe Peg to be a “river child,” taken over by an evil spirit from the Magurvey river that winds its way through the town.

Feared and shunned throughout her childhood, Peg is blamed for every misfortune, from drought to ailing livestock. When her mother, her fiercest protector, dies suddenly on the same day WWI is declared, fourteen-year-old Peg must face not only the mistrust of the villagers, but of her father. His grief has driven him to take solace in drink and old superstition, leaving Peg with only her head-strong older sister for support.

It will take the terrible reality of the first World War to shake off the grip of old world beliefs. As the town’s young men begin to return mentally and physically damaged, or not return at all, the sheltered atmosphere of the town is broken. A bright flame of change will sweep through everyone’s lives, leading Peg into the future.

About the Author (from Second Story Press) 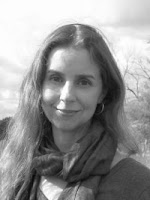 Lori grew up on a small farm in rural Ontario before moving to Toronto to be a starving artist. She was an overnight success. She went on to work as a jewelry designer before taking up her pen again, this time to write fiction. Lori currently lives with her husband in Toronto.

Lori is the host of the First Line blog, a source of inspiration for fiction writers.

Courtesy of the author Lori Ann Bloomfield and Second Story Press I have 1 copy of The Last River Child to share with my readers. To enter…

That’s it this time. This giveaway is open to US & Canadian residents only (no PO boxes) as the book will be coming directly from the publisher. I will draw for the lucky winner on Saturday, June 5, 2010. Good luck to you all.