Hey everyone, I know I haven’t done an update on Buddy in a while and I’m sorry about that so this is an extra long post. I’m just trying to get through each day and get what he needs done. He’s become quite difficult to feed as he doesn’t seem to have an appetite most days so I have to try every few hours and usually get down on the floor to feed him. It seems that all I’m doing is cooking chicken and vegetables and trying to feed him all day. I don’t mind; it’s just that I get upset when he won’t eat because I know to keep up his strength and stay reasonably ok, he needs to eat.

I had him in for some more blood tests this past Friday. They were testing the how his adrenal gland functions. As I was writing this I heard from the vet. Buddy does show a problem with his adrenal glands which indicates Cushings Disease. Yet many of the most common symptoms of it Buddy doesn’t have. The vet is going to speak with the pathologist on another test they can do to hopefully better determine Cushings. So basically I’m still no further ahead than before. Cushings Disease is not curable either but can be maintained depending on how well the pet tolerates the medicines. However if it’s an adrenal gland tumor then you’re looking at only a few years as surgery is pretty dangerous because of blood clots, etc. His ultrasound didn’t show a tumor but there can be small ones that aren’t seen unless you’d do something like a CT scan which apparantly they don’t do often on pets. Unfortunately the vet said we still can’t rule out something called amylodosis which is not good. There isn’t a cure nor is there treatment; basically you can just keep your pet comfortable. They can be with you anywhere from a few months to a few years, but not likely more than that. So far Buddy hasn’t been losing weight but if he keeps up with not eating he surely will. So here I am again waiting to hear from the vet as to the next move. At least my vet is really good and goes to great lengths to make sure he’s doing the right tests instead of me spending a lot of money on ones we don’t necessarily need. The vet bills are already pretty scary but Buddy is worth it to me. The worst thing is that with a lot of these diseases dogs can get they are very hard to exactly pinpoint as these symptoms practically go for almost all of the diseases they can get.

Of course I’m devastated. My heart just hurts every time I look at him. I know other people have lost pets but I still keep thinking ‘why us’. Buddy is such a big and important part of my life. I got him shortly after I was first diagnosed with rheumatoid arthritis and even on my worst days I know he has to be fed and all that – he makes me want to get up out of bed those mornings. As well when I got sick a lot of my friends decided it was too much trouble I guess to stay friends with someone who just didn’t have the energy anymore to be going out all the time but he was always there. Needless to say I’m extremely attached to the little guy. He’s been so much more than just a dog for me – he’s pretty much been a lifesaver at times.

Anyhow when I hear from the vet I’ll post again. Hopefully I’ll have more of an idea of what to expect and stuff like that. I know I haven’t been visiting blogs and I probably won’t be for a while. I’m not even completely sure what I want to do with the blog at this point. I’ve lost a bit of the will to keep it up right now. I am fulfilling all my tour dates and such but not booking much extra right now. I think ultimately I may just go back to the old days where I read what I wanted and then just write reviews. I really haven’t made a set decision there yet.

Thanks to all of you who have kept up reading my reviews even though I haven’t been commenting on your blogs. I do miss the interaction sometimes. As well thanks to all of you who have sent me emails and commented here on the blog with wishes and prayers for the Budster. It means a lot to me. I took a few pictures – the first one is of Buddy the other day when he had his blood test. You can see his pretty little bandaid on his paw. The second one is of his new haircut that he got yesterday. It’s extremely hot here right now and there was no way I could leave the little guy as furry as he was – he would have been really uncomfortable today. Doesn’t he look like a completely different dog with his short hair? I’m partial to the long hair but I love him with his haircut just as much! 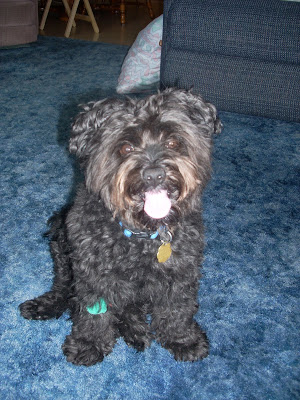 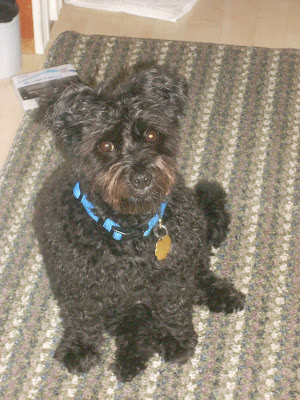 Again, thank you all so much for your support. I have no words – just thank you.