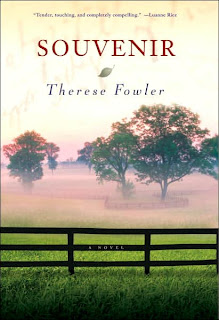 Souvenir by Therese Fowler was one of those books that I just lost myself in and enjoyed a great deal. I think it just may be one of my favorites this year. This book is emotional and heart wrenching and yet so good. It makes us think about where the decisions in life take us and how our lives may have been different had we taken the other road. I found myself so engrossed in this story that I felt the characters pain and sadness and was angry when they did something stupid. A book that evokes such strong emotion is always a good one for me.

Meg Powell comes from a poor family. Her father is one of those who loves to try new things with usually not much success. Consequently his family suffers. Meg though has Carson Mckay; they have been together and in love for as long as anyone remembers. They’re planning on a life together with a farm, horses and a family. However Meg learns something about her family and this sets in motion a string of events that leave her life and Carson’s anything but what they had planned for. Meg gives up everything – her happiness and her future with Carson – for a secure future for her parents and sisters. She marries Brian.

Meg meets Brian Hamilton while working in the bank. He’s the boss and he has an eye for Meg. Of course he tries all the normal routes to get her to go out with him but she’s loyal to Carson but then Brian manages to hit on the one thing that will get her to change her mind. Once they’re married she certainly doesn’t have a bad life. She becomes a doctor and has a daughter Savannah and they are definitely not hurting for money in any way. She has even grown to care for Brian as he’s not a really bad guy – the one thing she doesn’t have though is the passion and love that she had once shared with Carson who has gone on to be a famous rock star.

Meg and Brian are always busy leaving their sixteen year old daughter Savannah to fend for herself the majority of the time. Lucky for them she seems to be a smart and level headed kid. The one thing they didn’t count on though was her need to feel cared for and her need for the attention that she is longing for. She manages to get herself into quite a lot of trouble that had me just wishing I was there to bop her ears. For a smart girl she wasn’t thinking at all.

Meg then is hit with the most devastating news of her life. In the past few weeks she’s noticed that she’s had problems with her arm and now her leg is starting. She’s unable to complete a surgery and knows she must investigate. It’s the worst news – she has Lou Gehrig’s Disease which essentially means she won’t be around to see her daughter grow up.

Meg’s disease seems to be progressing more quickly than it does in some others and she knows she doesn’t have a lot of time left before she will be unable to function. Like others I imagine with not a lot of time left she thinks back to the things she wished she had taken more time with – like her daughter and herself. She thinks back to what might have been with Carson and they end up re-connecting. Their love never died – it was still there all those years later and it was just what Meg needed.

This book is full of characters you will come to care about. Meg is a great character and my heart hurt for her. I had great respect for how she handled her disease and the decisions that she ultimately makes for herself. Even her daughter Savannah who took the wrong path for a while and her husband Brian who was a jerk really for the pressure he put on Meg were likable. Then Carson you can’t help but like. He had a life and was planning for a future and yet when Meg needed him, he dropped everything to be there for her.

Souvenir is well worth reading. I will admit to shedding more than a few tears. I finished this book well over a week ago and these characters are still on my mind and in my heart. Therese Fowler has a beautiful way with words and storytelling and I certainly look forward to reading her other novel Reunion next.

My thanks…to myself. I bought this book.