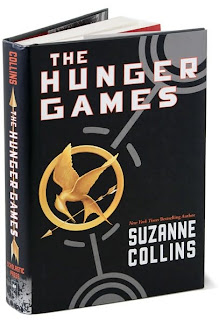 Well there has certainly been a lot of hype in the blogging world over The Hunger Games by Suzanne Collins and I’m going to be joining in. I really enjoyed the book although I have to say that the beginning few chapters really didn’t grab me and I was beginning to wonder why everyone was so crazy about the book. Then the Hunger Games began and I was hooked and I just couldn’t even put it down!

The Hunger Games is a dystopian novel – it takes place in the future. These kinds of books always give me pause as you never know what can become of our world. The world now is run by the Capitol and in it are 12 districts which each run their own industry such as coal mining, agriculture, etc. There still seems to be the usual hierarchy in power even in this new world with the richer people who can afford to eat, etc. and those who can’t who rely on hunting for their food instead.

This is the world Katniss lives in. She is part of District 12 and her father, before he got killed, was a coal miner. While he was alive the family of Katniss, her mother and her little sister Prim had enough to live on but afterwards, well that was a disaster. Katniss ended up being the caretaker essentially of the family as her mother fell into a deep depression. This is how Katniss ends up being such a good hunter; she really had no choice. She has a hunting partner too, Gale, a boy who is in much the same boat as she is.

Every year the Capitol puts on The Hunger Games which is a hunt to the death for the participants. There can be only one winner. The Hunger Games came about as a way of keeping the districts in line. This event is huge. There are celebrations and it’s televised – even the poor communities who are lucky to have power for a few hours a day always manage to have power during this event. The Capitol will take, by draw, one boy and one girl aged 12 to 18 to participate in the games. Over the years members of families can trade in extra entries for the games for food for their family so needless to say both Katniss and Gale have quite a few in there trying to provide for their families.

So the day arrives and everyone is gathered to learn who will be going to the games. The names are drawn for District 12 and Prim, Katniss’s sister is chosen. Before Prim can even reach the stage 16 year old Katniss steps up and takes her place. The boy from District 12 is Peeta, he is the baker’s son. He is also a boy that Katniss feels she owes something as once, long ago when her family was starving, as a little boy Peeta risked a beating to get a few loaves of bread to Katniss.

Katniss and Peeta go through all the lengthy celebrations and other matters to get to the games but eventually the day does arrive. The 24 participants are let out into an area that is wooded and left to fend on their own and kill each other. This is where the story takes off for me and the pages flew. I couldn’t wait to see what would happen next and how Katniss would make it or if she even would. The author manages to create a very believable world in this novel.

I really liked the character of Katniss and of Peeta as well. They are both good kids put in a bad situation. Neither is a killer but when it’s either do or die, I think most of us would go to any length to protect ourselves. Katniss is a tough girl and yet very caring as well. She will go to any lengths to protect her family and she’s just plain likable being a funny and smart girl. I am very curious to see how the relationships will go in the second book – will it be Katniss and Peeta or Katniss and Gale. I have no preference yet as I think both of them are stand up guys. Maybe the second book will lead me to want to choose between them.

I’ve already started Catching Fire, the second book in the series but I haven’t gotten far enough to be completely taken with it yet to the point where I will be unable to put it down until I finish it. I almost want to wait a while to read it so I don’t have as long to wait for Mockingjay but I know that won’t happen so I won’t even try. I do recommend this book for those who haven’t actually read it t yet, especially to those who like these types of novels that deal with what the future could possibly be. I’m certainly looking forward to more!

My thanks…to myself. I bought this one!