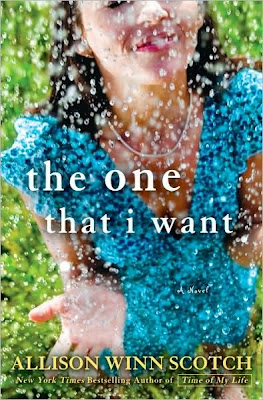 Do you ever wonder what it would be like if you could get glimpses into your future and know what was going to happen before it did? Well that’s exactly what happens to Tilly in Allison Winn Scotch’s newest novel The One That I Want and it ends up being quite the journey of self discovery for her. I’ve loved Allison’s previous two novels, The Department of Lost and Found (my review) and Time of My Life (my review) and The One That I Want is right up there with the rest. This is one talented author well worth the read!

Tilly has the world by the tail. She’s one happy lady – she’s got her job as a guidance counselor and she’s married to her high school sweetheart and they’re trying for a baby. She’s never left her small town of Westlake and has never had the urge to. So, of course she’s happy or……….is she? Tilly goes to the town fair and encounters an old school friend Ashley who tells fortunes now. Tilly thinks it’s craziness but sits down with Ashley. What Ashley ends up giving her is clarity. Clarity to see how the things in her life really are versus how she thinks she’s seeing them. What follows is a total upset to Tilly’s otherwise very quiet and ordered life that she’s been so comfortable with.

Tilly starts having visions – she gets this pain that starts in her toes and works its way up and then she just blacks out and sees things. She’s seeing things into the future and she’s none too happy with what she’s seeing. She sees her dad stumbling drunk out of a bar and he hasn’t had a drink in years and worse yet she has a vision of her husband packing up a uHaul. This can’t be good. This can’t be what will actually happen. Will it?

So of to see Ashley she goes but it gets her nowhere. She tells her to take back this so called gift of clarity that she’s given her but Ashley tells her it doesn’t work like that. That she didn’t actually give Tilly anything – just really opened her eyes to the reality of her world. Well Tilly doesn’t like the reality of her world anymore- her father has taken up drinking after being sober for years and her husband is leaving her – what could be good about the gift of clarity if it means all of this pain along with it?

I really liked Tilly as a character. A little naive about her life but hey, until everything went haywire on her, she really was happy. Since her mother died when Tilly was 17, she has spent her life taking care of her younger sisters, her father – really everyone. Tilly is one of those people who has a problem saying no so of course everyone is always coming to her for something. Yet that’s what makes her the caring and kind person she is with her students and the people in her life.

When her life starts unraveling though she starts to see a different Tilly. A Tilly that’s angry and starting to fight back at the unfairness of it all. I mean, come on, her husband told her he wasn’t coming home in an email. She’s mad. Yet at the same time she’s starting to see that maybe this ‘perfect life’ she thought she had wasn’t so perfect. Now she’s seeing the signs that all wasn’t well and she’s also starting to realize that she can have a good life without her husband. What she originally thought defined her she begins to realize really didn’t. There was much more to Tilly Farmer than she would have believed and she’s going to dig deeper to find that woman.

The One That I Want by Allison Winn Scotch is a great story. It really makes you think about what you would do if this happened to you. I don’t think I’d want to see the future unless I knew for sure I could change it for the better. This book also leaves you wondering what if you had done things differently when you were younger – maybe took the road less traveled and seen where it would go. Does playing it safe really bring you all the things you want in life or keep you from heartache? I’ll leave you with one of my favorite quotes…

‘…the years are long and the road is winding and that dreams float out there to be captured, but only if you’re brave enough to reach up and grasp them.’ (pg 252)

Courtesy of the publisher Shaye Areheart Books, I have 1 copy of The One That I Want by Allison Winn Scotch to share with my readers. To enter…

This giveaway is open to US and Canadian residents only (no PO boxes) and I will draw for the winner on Saturday, June 26, 2010. Good luck everyone!