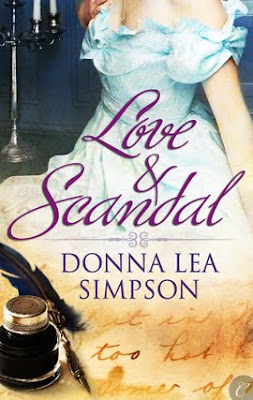 I’m happy to welcome Donna Lea Simpson to Peeking Between the Pages today. I read Lady Anne and the Howl in the Dark last year and thoroughly enjoyed it (my review). She’s now with Carina Press (Harlequin’s all-digital imprint) and she’s got a new historical novel called Love & Scandal, a passionate Victorian romance which released digitally on June 21, 2010. I’m looking forward to reading it as I really enjoy Donna’s spunky writing style. I will be reviewing Donna’s novel but unfortunately it wasn’t in time to go along with her guest post which I’m going to share with you right now entitled…Love & Scandal & the Victorians – enjoy…

We tend, from our lofty viewpoint more than a hundred years after its close, to view the Victorian era as a time of repressed sexual desire, prudery and the beginning of a century of trouble over sex and scandal. Nowadays, we view celebrities through the peephole of modern gossip magazines and TV shows, but the contradiction between modern more relaxed sexual mores and yet the fact that the ‘scandal’ press is alive and well and living in Hollywood doesn’t seem to strike anyone as odd. How can we both celebrate sexuality in film, TV, and the press, and yet find it so scandalous that people have sex lives? It puzzles me on occasion; I don’t believe that today’s celebrities are having any more scandalous affairs than folks – writers and actors and politicians – did 200 years ago.

So how did society advance from the open profligacy of the Regency age to the repression of the Victorian? One scholarly paper I read postulated that the advent of popular journalism is at the root of the increasing ‘scandalization’ of the nation. I suppose I unwittingly fell into agreement with him as I planned and wrote Love & Scandal, my novel about a female author who published her ‘scandalous’ novel using a male pseudonym, and inadvertently wound up in the pages of the gossip sheets!

About Love & Scandal, the novel:

Collette Jardiniere, the heroine of Love & Scandal, caved in to the moral pressure of her time when she decided to publish her novel, The Last Days of a Rake – a novel that deals candidly with a Regency rake’s shocking sexual affairs – using the pseudonym Colin Jenkins. She is appalled and infuriated when she discovers that an infamous gossipy rag sheet slyly hints that a well known man-about-town, Charles Jameson, is the real Colin Jenkins, and that the book is autobiographical. Her decision to go to London to confront first her publisher, and then, when she gets no satisfaction (she wants her publisher to publicly deny that Jameson is Jenkins, but they are enjoying the resultant rise in sales) to confront the man himself, changes her life and embroils her in one of the London press’s infamous ‘scandals’.

I don’t think when I wrote the book that I realized how close I was getting to the truth, though! Sexual dealings among the elite were often cloaked in euphemism, secrecy assured by the connivance of those involved. Thus Charles Dickens, who separated from his wife to continue his affair with an actress, maintained the public’s respect only because many factions supported his evasion of the truth. And yet others were destroyed by the press’s avid pursuit of scandal. If the middle-class public had discovered Dickens’ extra-martial affair, he may never have continued as the leading luminary of the Victorian literary scene.

In Love & Scandal Collette finds herself banished from her hotel and barred from a friend’s home because of salacious revelations in the popular press about her behavior. She ruminates on the fact that if she had chosen to forgo using a pseudonym, and so avoided becoming involved with Charles Jameson, she would still have been open to scandalous gossip: “If she had been firm with herself and her aunt, and published under her own name, then she would not be in this mess now. Not this particular mess, anyhow. No doubt Henny would still be barred from seeing her—Herbert (Henny’s husband) would certainly think Last Days scandalous and she as a woman writer immoral—but at least it would be for something she was proud of, not her own weakness as a woman, her capitulation to Charles Jameson.”

But I was able, in Love & Scandal, to use another real-life Victorian writer to further expound upon moral scandal in the Victorian age. Collette meets Mary Ann Evans, who will, a few years later, be better known as George Eliot. Mary Ann is suffering, at this point, from the scandal she has brought down on herself by co-habiting with a married man, George Lewes. But the tragic truth of their situation is that George is still accepted in most homes, while Mary Ann, as a ‘fallen’ woman, is barred from polite society.

Victorian society was fascinating, and I had a great time exploring the many sides of love and scandal in Love & Scandal. But at the heart of the novel is a love story between a woman who can’t follow the dictates of Victorian society, and a man who admires her for her independence.

I hope you all enjoy the novel! Love & Scandal is published by Carina Press, the new all-digital imprint form Harlequin Enterprises!

If you want to read how scandalous Collette’s book is, download and read her pseudonymous novella, The Last Days of a Rake for FREE! See the Carina Press site for details. 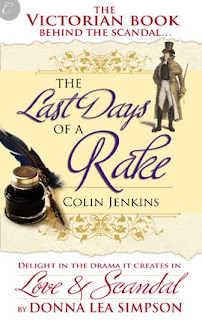 Your very welcome Donna! I really look forward to reading Love & Scandal and The Last Days of a Rake!
__________

Like most writers, I learned to read early and fell in love with books. The passion was strong enough that I would literally ‘have my nose in a book’, absorbing it, as if the plots and characters seeped through my skin and down to my bones. The world just seemed so much bigger in the pages of a book, and sometimes the characters in them were more vivid even than any of the folks I knew.

I’m really not sure when I figured out that someone wrote the books I loved to read, and that maybe… just maybe!… I could be one of those people… those writers, but by the time I was about 12, I knew. The only life that really made sense was one that included writing.

Of course, after that, it took a loooong time before I connected the two facts; my love of writing, and that it was possible to choose it as a career. I dilly-dallied for a long time, doing anything but writing.

So I’ve done a lot of different things as ‘work’. I’ve been a sales clerk, and a receptionist. I’ve cleaned people’s homes, and I’ve worked in a factory. But for the last ten years I’ve been an author, and it’s everything I hoped it would be, and much, much more.

I first decided to try my hand at romance novels solely because there was a market for them, but then I fell in love with Regencies! I’d read all of Jane Austen’s books, as well as Maria Edgeworth, so I had a little background in the period, though it was woefully inadequate for what I needed.

I read a lot of Regencies, too, though: Mary Balogh, Patricia Veryan, Jo Beverley, Mary Jo Putney. But the fun really began when I wrote my first Regency romance for a (very small) publisher, then wrote another and approached Kensington with a quivering stomach and loads of fluttery butterflies.

I was lucky. They were enthusiastic about Lord St. Claire’s Angel, and voila, I had a writing career. I loved writing Regencies, but before long it was time to branch out, and since then I’ve written mysteries, contemporary romances and paranormal romance.

What I love most about writing is creating characters and weaving their lives, tormenting them a little, then letting them find happiness, love and fulfillment. I write what I like to read, and I love mystery in my romance, and romance in my mystery!

Do I have a life outside of writing? Well, of course! I have a lot of other interests, among them cooking, the outdoors, crafts (beading, cross-stitching, etc.) collecting vintage cookware. I like to read, especially mysteries. I enjoy a nice glass of wine with friends, and summer evenings on the patio. I’m lucky to be surrounded by wonderful family and lots of friends.

I hope you enjoy my books, and come back occasionally. I’ve got lots more stories up my sleeve, and won’t rest until I put them down on paper!

Have a great reading day!

I have 1 eBook copy of Love & Scandal by Donna Lea Simpson to share with a lucky reader! To enter…

This giveaway is open worldwide as it is an eBook copy so it’s open to anyone with an eReader to download onto. The publisher will issue an ecoupon to the winner. I will draw for the winner on Saturday, July 10, 2010. Good luck everyone!