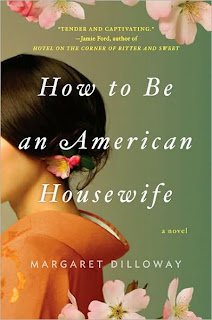 How to Be an American Housewife is Margaret Dilloway’s debut novel and a good one at that! I always enjoy novels based on different cultures and places so this book intrigued me from the beginning. Set in Japan and the US, it takes us on a journey through the life of a Japanese woman coming to America as a housewife and the difficulties that presents for her. Not only that but this is a story of a mother and daughter who find their way to a better understanding of each other and the rebuilding of a relationship.

We meet Shoko who is a young Japanese woman in the beginning of the novel who ends up marrying an American GI, Charlie, in order to please her parents. Yet she’s doing it for herself as well because she wants to go to America and start a new life after suffering a heartbreak of her own in Japan. Shoko’s early life in the US is hard – she has a hard time making friends as people shun her and getting used to new ways and traditions is hard for her. Still she works hard to make a good home for Charlie and her children as a proper wife should.

Shoko, now in her older years is suffering from heart problems that may have been caused by radiation in the war. Her one dream of returning to Japan and mending the devastated relationship with her brother Taro is fast slipping away from her. This is one thing she feels she must do if she’s going to die so she asks her daughter Sue to go in her place.

Sue, at first isn’t receptive to the idea but her daughter Helena sure is and this ultimately sways her mother enough that she agrees to go. Sue and Helena arrive in Japan and meet several of their relatives but Taro is the one that Sue really must see and he is none to happy to see them at first. However Helena I think is really the one that wins him over and he begins to open up and the gulf that has existed in the family is finally closing in.

The first part of the novel is told in flashbacks through Shoko as she thinks back on her childhood and growing up, her relationship with her brother Taro, and what ultimately tears them apart. The second half is told through her daughter Sue as she struggles to find her place in life and finds that the the trip to Japan is just what she needed to open her eyes to new possibilities.

At the heart of this novel is the story of a mother and daughter who never quite were able to come together. Shoko, being from Japan, was a much different mother than Sue’s friends in America were and they both struggled. As well Shoko has always been outspoken and not at all patient and never really gave Sue a chance causing her to grow up feeling that she had been nothing but a disappointment to her mother. The trip to Japan changes everyone’s lives as long buried secrets are brought to light and the healing can begin.

I enjoyed How to Be an American Housewife by Margaret Dilloway. I’ve heard many compare it to The Joy Luck Club by Amy Tan but since I’ve never read that one I can’t really say. For me it was a fresh, good story. It’s an easy read that I think would make a great summer read or a good one for a book club as I think most mother/daughter books generate much discussion. There’s even a Reading Group Guide provided on Margaret Dilloway’s website to help you along.

What made this book even better for me is that it was based on a lot of experiences from the author’s life. Her own mother was a Japanese war bride and ultimately passed away from the very same heart problem that Shoko suffered with. I think it must have been difficult or maybe healing to write a book such as this and think back on your own mother’s life.

I read How to Be an American Housewife by Margaret Dilloway for her book tour with TLC Book Tours. You can check here for other tour stops and see what everyone else thinks as well. You can pop in and check out Margaret Dilloway’s website for more info on the book. If you just can’t wait to read it you can buy it here in the US and here in Canada.

My thanks…to TLC Book Tours and the publisher for my review copy of How to Be an American Housewife by Margaret Dilloway.

I have 1 copy of How to Be an American Housewife by Margaret Dilloway to share with my readers. To enter…

This giveaway is open to US & Canadian residents only (no PO boxes) and I’ll be drawing for the winner on Sunday, August 8, 2010. Good luck everyone!