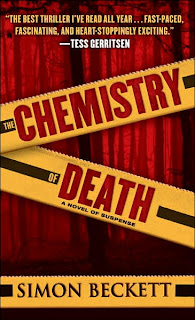 The Chemistry of Death by Simon Beckett is a forensic crime thriller and it certainly kept me guessing and on the edge of my seat at times. Typically this type of book is out of my comfort zone but I’m so glad I read it with one of my book clubs, The Reading Cove, because I really enjoyed it.

You know I find with novels such as this they seem cold and just plain procedural to me but Simon Beckett writes in such a way that he manages to have you caring about his main character, Dr. David Hunter. Not only that but his writing is truly great – his descriptions of the area and the people are very vivid and real – he has the knack for drawing you completely into the story he’s telling. As well, I’ll stop right here and say his descriptions of the decomposed bodies and the crime scenes are vivid enough to give you the creepy crawlies for a good long time and I loved it!

Dr. David Hunter is running from his life in which his wife and daughter have died in an accident. He applies for a job in the small English village of Manham as a general practitioner even though he’s actually a well known specialist in his field of forensic anthropology. He’s had enough of death and with all his specialized knowledge of exactly what happens to a body after death only leaves him more tormented over the deaths of his own family.

So when the first death occurs in Manham, David finds his past coming at him front and center again when the police want his help in identifying the badly decomposed body and determining other things necessary to the investigation. Yet, the reason he left his job behind is to forget so he wants to avoid the decomposing bodies at all costs but when another woman is found dead he realizes he has to do what he can to help find the killer who is murdering in such a horrible way.When the killer hits a little too close to home for David, he is even more determined to uncover who it is and stop him.

Being a small town the citizens of Manham are very suspicious of ‘outsiders’ and unfortunately for David, he is one of them. He’s surprised though; as he’s been doctoring these people now for three years but that doesn’t matter – to them, he still doesn’t belong. So he carries on helping the police and trying to decipher clues along the way. When one such clue leads him to believe he knows where the next victim is being held, the tables turn on David in the worst way and everything he thought he knew blows up in his face. What will happen? Will David get to the next victim in time or be a victim himself?

As you can tell, I enjoyed this book enough that I fully intend to read the second one, Written in Bone, next. Simon Beckett is one author I intend to follow and keep tabs on as to what he does next. If you enjoy a thriller with some gory details thrown in and a great story line you may want to check Simon Beckett’s books out!

My thanks…to myself. I bought The Chemistry of Death by Simon Beckett for my eReader.