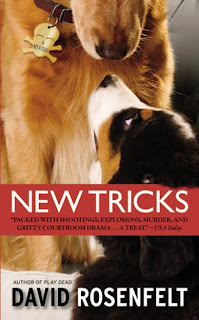 Today is giveaway day at Peeking Between the Pages. I’ve got a few giveaways to post thanks to the wonderful Valerie and Anna over at Hachette Book Group.

First up is a book called New Tricks by David Rosenfelt and it sounds really good! It’s got dogs in it so of course that just ups the book in my eyes already. Not to mention the cover – I’m in love! Isn’t it adorable! Here’s a bit about it:

Attorney Andy Carpenter is about to represent an adorable Bernese mountain dog puppy, whose owner was brutally murdered, in a custody fight. Few can rival Andy’s affection for dogs, and he’s determined to keep Waggy from falling into the wrong hands. But this playful pup possesses a valuable secret that some people will resort to violence to obtain. It will take more than Andy’s usual courtroom theatrics to save Waggy, including help from the lawyer’s golden retriever, Tara. Andy soon discovers that everyone around him is in danger, including his longtime girlfriend, Laurie–and only some high-risk new tricks will save those he cherishes most.

Be sure to check David Rosenfelt’s website out as well!

Sounds like a good read, doesn’t it? Well you have a chance to win yourself a copy. I have 3 copies of the paperback edition of New Tricks by David Rosenfelt up for grabs. To enter…

This giveaway is open to US & Canadian residents only (no PO boxes) as the books will be shipped directly from the publisher. I will draw for the winners on Sunday, August 22, 2010. Good luck to you all!