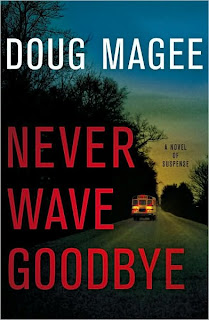 I’m pleased to welcome Doug Magee, author of Never Wave Goodbye to Peeking Between the Pages today. I reviewed his debut novel yesterday (my review) and it was one I quite enjoyed. It’s a book that will keep you on the edge of your seat and turning the pages as fast as you can to find out who’s at the bottom of the crime. Without further delay let’s relax with a cup of coffee and see what Doug has to say in his guest post entitled A Slow Reader…

When I was young my sister, who is three years older than I and who was in high school at the time, took an Evelyn Wood speed reading course. It was all the rage then and she made good use of it. In a very short time she was devouring books. But she had been devouring books, at a slightly slower clip, before she took the course and really didn’t need it. Her brother, yours truly, was the one who needed the course.

But for some reason I never enrolled (too busy throwing some sort of ball in some sort of game, I guess) and I remained the plodding reader I have been all my life. How slow am I? These days I think I write faster than I read. If I’m reading a newly-minted first edition of a book I just hope I can finish it before the second edition comes out.

Despite my inability to gallop down a page, I did relatively well in school. Truth be told, however, I often found ways around my reading speed. In high school, for instance, I caught a huge break when the movie version of Tom Jones appeared in our local theater exactly as I was slogging through the first chapters of the book, way behind a deadline for a paper. And in college I lucked into an English course taught by a teacher who believed the heart of literature was in the small moments of imagination and had us do papers on, literally, one paragraph in a book or short story. I was able to read that paragraph in, oh, one or two evenings easily.

I joke but I think it was that course that eventually led me to write fiction. What that teacher, Benjamin DeMott, emphasized was the importance of going inside a moment in a story, of making it real and believable. The act of translating that moment to the page was for him the soul of writing. I don’t think I fully understood this until I began to try my hand at stories, screenplays and novels. Now DeMott’s insight is with me every time I sit down to write.

What does this have to do with slow reading? Perhaps it’s this, that slow readers, like slow drivers on the highway, have more of an opportunity to see the details, enjoy the scenery, appreciate the moment. They may not be great on the big picture, may not have read voluminous amounts and thus be able to bring mounds of knowledge and insight to their writing. But slow reader writers might just (self-serving pronouncement alert) be more attentive to detail, to the moment, to nuance.

I don’t know how you’d test this. Who knows if a writer is a fast or slow reader? Maybe I’ll start a little movement with my next book and include the following on the jacket: Doug Magee did not take the Evelyn Wood speed reading course.

Thanks so much Doug for the great guest post. I’ve always been a fast reader myself but you could be right about slow readers catching a lot more details. lol.

An innocent rite of passage turns into a nightmare for four couples, exposing their secrets and risking the lives of their children.

After passing the bittersweet parental milestone of putting her daughter, Sarah on the bus to sleep-away camp for the first time, Lena Trainor plans to spend the next two weeks fixing all the problems in her marriage. But when a second bus arrives to pick up Sarah for camp, no one seems to know anything about the first bus or its driver.

Sarah and three other children have been kidnapped, and within hours of the crime the parents receive an email demanding $1,000,000. When the specifics of the delivery terms throw suspicion on the parents of two of the abducted children, some of the parents begin to turn on each other, exposing fault lines in already strained marriages and forging new alliances. While the kidnapped children are living their parents’ worst nightmare, the police are trying to sort the lies from the truth in conflicting stories and alibis that seem to be constantly changing.

Deftly weaving the emotional story that pits the parents of the missing campers against the police – and each other – with the fate of the kidnapped children hanging in the balance, Never Wave Goodbye will keep readers holding their breath until the last page.

Doug Magee is a writer, photographer, and filmmaker living in New York’s East Harlem. He is a graduate of Amherst College and Union Theological Seminary.

He is the author of SLOW COMING DARK, a book of interviews with death row inmates, and WHAT MURDER LEAVES BEHIND, profiles of families of murder victims. In addition, he has written three children’s books.

His film include the HBO movie SOMEBODY HAS TO SHOOT THE PICTURE and the Showtime movie BEYOND THE CALL.

He is married to Mary Hedahl, the director of development at the New York Civil Liberties Union. The eldest of his three sons, Tim Magee, is married to Julie Tant Magee and they are the parents of William and Natalie. Joey Magee is a junior at Beacon High School. Jackson Magee is a freshman at Bard High School Early College. All three sons are left handed.

Doug is passionately opposed to state-sanctioned killing and hopes to see the demise of this archaic punishment in his lifetime.

He has been a Yankees fan his entire life and doesn’t plan to change any time soon.

He plays softball with the Writers Guild of America East team and trombone with the East River Jazz Band, both badly.

I have 1 copy of Never Say Goodbye to share with my readers. What do you need to do to enter:

This giveaway is open to US & Canadian residents only (no PO boxes) and I will draw for the winner on Saturday, August 21/10. Good luck everyone!