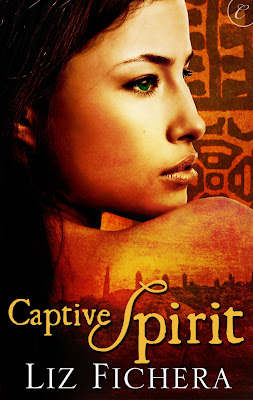 I’m pleased to welcome Liz Fichera to Peeking Between the Pages today. Her debut novel, Captive Spirit, was released digitally through Carina Press on June 28, 2010. I had hoped to have my review up yesterday before the guest post but everyone will just have to tune in tomorrow for it instead. I wasn’t feeling well and just didn’t get it done in time. I will say though that I enjoyed the book – it was a little different from anything I’ve been reading so it was a nice change for me. Today Liz is joining us with a guest post entitled…Finding Inspiration…

When I first moved to Phoenix, Arizona, from Chicago, Illinois, I never expected to live in the Sonoran Desert for more than a year. Tops. I mean, how could I live around cactus and people who’d never seen snow? Or a deep-dish Chicago-style pizza? But my shock wore off and I very quickly came to love and appreciate not only the unique beauty of the desert but also the rich history behind it.

Early on, I remember learning about the Hohokam Indians, Phoenix’s first inhabitants. Originally from the ancient Mayan and Aztec culture, the Hohokam traveled to what is now known as Arizona around 300 BC. They existed peacefully as farmers and master canal builders until around 1500 AD when they vanished for reasons unknown. It was the Pima Indians who called them Hohokam, which means “Those Who Have Gone.”

Now, color me crazy but that just begs for a story.

And that little known bit of history is also the inspiration behind my debut historical romance novel, CAPTIVE SPIRIT.

There are lots of theories as to why the Hohokam vanished from the desert—war, fire, drought, famine, migration—but no one really knows why. Why would a thriving population, which reached 50,000 people in its peak, simply up and leave? And, strangely, where did they go? They left behind cultivated fields, canals (some of which still exist today), burial grounds, pit houses, and ball courts. They left behind their whole lives.

If you’re ever in Phoenix, put the Phoenix Heard Museum on your list of “must-see” attractions. The Heard has one of the most comprehensive collections of Native American history in the world, and it’s where I learned a lot about the Hohokam—what they wore, ate, how they lived. Their petroglyphs are still visible throughout the Sonoran Desert too. I included a couple of photos in my book trailer on my web site. It’s fascinating to me that these people lived on the very ground where my Phoenix neighborhood now sits. Given their unusual history, I’m even more dumbfounded that more writers haven’t written stories that included Hohokam Indians.

Even though Aiyana in CAPTIVE SPIRIT is fictional, I have to wonder what a young Hohokam woman like her would have dreamed about when she gazed past the mountains that surround Phoenix and what her life must have been like over 500 years ago. CAPTIVE SPIRIT is her story.

Aiyana isn’t like the other girls of the White Ant Clan. Instead of keeping house, she longs to compete on the Ball Court with her best friend Honovi and the other boys. Instead of marriage, she daydreams of traveling beyond the mountains that surround her small village. Only Honovi knows and shares her forbidden wish, though Aiyana doesn’t realize her friend has a secret wish of his own…

When Aiyana’s father arranges her marriage to a man she hardly knows, she takes the advice of a tribal elder: Run! In fleeing, she falls into the hands of Spanish raiders and finds herself being taken over the mountains against her will. Now Aiyana’s on a quest to return to the very place she once dreamed of escaping. And she’ll do whatever it takes to survive and find her way back to the people she loves.

Thanks so much for joining us at Peeking Between the Pages today Liz with this great guest post! I enjoyed Captive Spirit and look forward to your next novel!

Liz Fichera likes to write stories about ordinary people who do extraordinary things, oftentimes against the backdrop of Native American legends. Her debut historical romance novel CAPTIVE SPIRIT is available from Carina Press and wherever e-books are sold. Please visit her web site at http://www.lizfichera.com/.

Liz is giving away a free digital copy of CAPTIVE SPIRIT to one lucky person who leaves a comment or asks a question on today’s guest post.

That’s it – that’s all you have to do along with making sure you leave me an email address so I can contact you if you’re the lucky winner. This giveaway is open to anyone with an eReader to read the book on. I will draw for the winner on Saturday, July 24, 2010. Good luck to all!