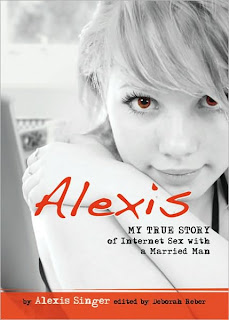 You always hear about it and it horrifies you and scares you for your own children. What is it? It’s online predators – one of the scariest things today about the internet for our young people. In Alexis: My True Story of Being Seduced by an Online Predator, Alexis Singer shares her most private thoughts on the nightmare that was her life when this happened to her and almost destroyed her and who she thought she was.

Alexis is lonely – she’s not having the best summer. She’s just finished her junior year of high school and she’s stressed right out. She had broken up with her boyfriend months earlier and the friends that she’s had for years seem to not want to hang out with her any more and her parents are increasingly unavailable to her. As if that isn’t enough she’s dealing with SAT’s, AP courses, deciding on colleges, her father divorcing her stepmother, and struggling with making new friends. That’s a huge amount of pressure on a sixteen-year-old girl.

As with most teenagers, Alexis spends a lot of time on the computer. She had found a message board that she frequented all the time and in it she had found a place where she could go to and escape her everyday life and talk to people who had similar interests. She felt like a somebody there – people listened and responded. On this board was one man who was the most popular but also really sarcastic and rude. It seemed he didn’t like Alexis at all, taking every chance he could to insult her political views and her age. So, why when an instant message appeared on her screen from this man and she actually responded to it remains unclear to me and her. Even more scary was what the first message said, ‘yer not 18 yet, are ya?’ (pg 7)

This was the beginning of what would be a hellish rollercoaster of emotions for Alexis. This 37-year-old man, ‘Phil’, wormed his way into her life, into her very soul and preyed on her loneliness and vulnerability. She said she probably would have dismissed him as a creep ‘but he was older and he was smart, and he took the time out to recognize what I had to say. (pg 20) At first the conversations were about simple enough things but that soon changed and he began with the cybersex and the requests for naked photos of her. She knew it was wrong, she was uncomfortable with it and yet this man paid attention to her – something nobody else seemed to do so she went along with it.

By the time her mother found out what was going on this ‘relationship’ had caused her much emotional trauma for two and a half years. This man caused her to look at life differently – to look at men differently. Is that all men would ever want from her – her body and sex? Did she have nothing else to offer? This ordeal left her questioning everything about herself including her worthiness as a person. Her mother put a stop to everything by taking away her internet privileges and her phone but there are other ways of contacting someone if you truly want to.

Alexis is now taking control of her life although she admits to some sporadic contact with this man still – she still longs for him. I admit to not fully understanding that. The man has a wife and even had a child (how terrifying that he will be bringing up a daughter). How many other girls has he done this to? How many more lives has he destroyed – I bet plenty. At so many points in this book I was so angry at her for being so naive and yet understanding her desperate need for a connection of some sort with someone.

This book is so important in this day and age of the internet. There’s Facebook and who knows what else out there where there are these types of predators just waiting to prey on vulnerable young people. Maybe with more books like this young people will think twice before falling into what can only destroy them. I’m impressed with Alexis for sharing this very painful story with others; for caring enough to do that. If she can even help one other girl with her story that will be a good thing. There are also discussion questions in the book which would make it an excellent tool for a teacher or parent in sharing and talking about what can happen online with their students or their own kids.

Alexis is currently attending University and studying political science and women’s studies. I wish her every success in getting her life back on track and succeeding. In doing that, she ultimately wins.

I read Alexis: My True Story of Being Seduced by an Online Predator for TLC Book Tour’s Louder Than Words tour. I think the Louder Than Words books will be an excellent resource for young people and I’d love to see them do well – they are teens talking to teens and who better to do it. It’s a lot easier to listen and heed advice from someone your age than from your parents. Make sure to check out the Louder Than Words website for more information and Alexis’ page there. Deborah Reber, editor of the Louder Than Words memoirs has a popular blog for girls that you should check out as well called Smart Girls Know. If you’re a teen who has their own story to submit you can do so here.

I’ll be reviewing all three books on the Louder Than Words tour and I’m so glad I am. Please be sure to check back for my review of Hannah on August 24 and Rae on August 31. Be sure to pop in to all the other tour stops for these wonderful books! As a note, these books are not only of interest to teens. I found it extremely interesting as an adult as well and I think they’d be important for parents to read as well. They could pass on important clues as to what to look for in your own children when trouble is brewing.

My thanks…to Lisa with TLC Book Tours and the publisher for my review copy of Alexis: My True Story of Being Seduced by an Online Predator by Alexis Singer.

I have 1 set of all three books – Alexis, Hannah & Rae to give away to one lucky winner. I also have a copy of the single book Alexis to share with one reader. To enter…

This giveaway is open to US & Canadian residents only (no PO boxes) as the books will be coming directly from the publisher. I will draw for the winners on Saturday, September 18/10. Good luck everyone!