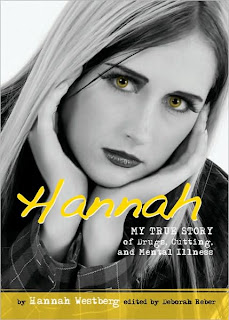 In Hannah: My True Story of Drugs, Cutting and Mental Illness, Hannah Westberg shares her heart wrenching journey into a world most of us only hear about but can’t imagine living. She shares with us her downward spiral into a life of drugs, cutting, weight issues, suicide attempts, family issues and mental illness.

As Hannah was growing up things started happening that would impact her throughout her life. Her mother suffering from her own mental illness was becoming increasingly manic although still able to hold down a job and lovingly take care of her kids. However eventually it worsened to the point where she tried to kill herself. Her mother was finally diagnosed with a mental disorder and of course this all meant that she could barely take care of herself let alone her children. To top it off Hannah’s father suffered from depression as well.

After a bad divorce the children ended up living with Hannah’s father and eventually he brought a new woman named Carol into the chaos that was their life. Carol made made many changes to the family and they were actually things that helped get them into a more stable life but the thing was that Carol never even wanted children and this unfortunately showed in all of her actions towards Hannah. Since Hannah’s mother had tried killing herself, Hannah suffered from issues of abandonment. Carol always threatening to leave the family and Hannah caused irreparable damage.

Hannah had the tendency to collect other people’s meds in her Altoids tin – she had no issues stealing from everyone to get them. The problem was she had no idea what the drugs were and would take them without caring. It was about this time that she starting cutting as well – she felt the need to punish herself and later the cutting gave her comfort.

Hannah’s first stay at a rehab center was after a failed suicide attempt just months before starting ninth grade. After this her weight issues really seemed to escalate. She was overweight and she constantly berated herself with negative statements. She had friends with issues of their own and I don’t think that was helpful in stabilizing her life in any way either. She had a few boyfriends but they didn’t work out. She continued on with bad eating habits, drugs, and cutting.

Hannah attempted suicide again. This seemed to be the last straw for her family and her father broke it to her that her stepmother didn’t want her at their home anymore. Carol couldn’t deal with Hannah and her issues and was hostile with her for all the years of problems she had put them through. I admit to having some issues with this. To completely put someone out of your life is too much for me – it isn’t like Hannah asked for a mental illness to control her life but then again Carol had never wanted children so that instinct to nurture wasn’t in her to begin with.

Eventually Hannah was diagnosed with borderline personality disorder. She’s nineteen now and in her own words, “still growing, learning, and striving for balance.” (pg 151) Her plan is to go to community college and become a drug and alcohol counselor. Again in her own words, “I have always dreamed of becoming stable and being able to tell others of the light at the end of the tunnel.” (pg 151) That is what she hopes she has done with this book as well. I really wish for her the best in her future and I pray she makes it and realizes her dreams.

I read Hannah: My True Story of Drugs, Cutting and Mental Illness by Hannah Westberg for TLC Book Tours -Louder Than Words Tour. This is the second book I’ve reviewed for this tour and again I must say how important I think these books are for the young people of today. For a teen to be able to read a book that’s written in a teen’s own words is a powerful thing – it’s someone in your own peer group telling you how it is instead of an overbearing adult. Check out the Louder Than Words website for more information and Hannah’s page there as well. Deborah Reber, editor of the Louder Than Words memoirs has a popular blog for girls that you should check out as well called Smart Girls Know. If you’re a teen who has their own story to submit you can do so here.

On August 31 I’ll be posting my review of Rae, the last book in the tour – please be sure to pop by and check it out. You can see all the other tour stops for these important books here at the TLC Book Tours website. Again, I’d like to say that I think these books are important for adults to read as well – whether you’re a parent, teacher or counselor you can come away with great info in dealing with teens in these situations.

Disclosure: My review copy of Hannah: My True Story of Drugs, Cutting, and Mental Illness by Hannah Westberg was provided by TLC Book Tours and the publisher.

I have one copy of Hannah: My True Story of Drugs, Cutting and Mental Illness to share with one of my readers. To enter…

This giveaway is open to US & Canadian residents only (no PO boxes) and I will draw for the winner of Hannah on Saturday, September 18, 2010. Be sure to check out the giveaway for 1 copy of Alexis and 1 full set of all three books: Alexis, Hannah & Rae being given away here as well. Good luck everyone!