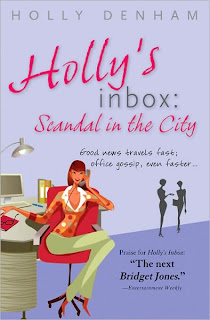 Holly’s Inbox: Scandal in the City by Holly Denham is a fantastic romp through the ever funny and amusing world of Holly’s emails. Last year I read and reviewed Holly’s Inbox (my review) and absolutely loved it! This installment is no different. Once I picked it up, I just couldn’t put it down. It’s amazing how fast 544 pages flies by and leaves you still wanting more. If you loved Bridget Jones, you may just find yourself liking Holly Denham more!

We jump right in where we left off in Holly’s life. She’s got it all now; she’s in love with her boyfriend Toby (they used to be childhood sweeties) and has a great job where she is in line for a promotion. Holly is still working as a receptionist at a major London bank and still pals with Jason, Aisha and Trish. What I liked about this second book was that we got to know another side to Holly – the softer, more intelligent side I’ll say. I adored Holly in the first book and this second book made her an even more likable and real character with strong emotions, hopes and dreams.

So, as usual, the office is just as crazy as ever and to top it off Holly is being harassed by a real cow of a woman named Tanya. Tanya unfortunately seems to be after Holly’s boyfriend and really seems to have a hate on for Holly. As well, not uncommon to the office, gossip is running rampant and it’s just this kind of gossip that will manage to throw Holly’s life into turmoil not only with her job but her love life as well!

This book is written entirely in email format and I love it! It’s like being able to peek into someone’s secret diary and be a big snoop! Holly and Trisha still email back and forth and Holly still emails her family and friends on a constant basis. My favorites are still Holly’s emails with her Granny who has had to go live with Holly’s mom now. Granny is absolutely hilarious and this book finds her trying to hook up with men on the internet and wanting to run away back to England. I was getting some strange looks as this book has so many laugh out loud moments that you just can’t help yourself.

I know it seems odd to say and you’d probably find it hard to believe but the author (who actually happens to be a man-Bill Surie) can make you care about and know his characters fully through only emails. He manages to weave a story throughout these emails and in this installment surprises us with a few things I didn’t expect to happen. I am grateful and thankful to Sourcebooks for bringing this second installment to all of us as it was only available in the UK before. I’m also hoping for a third book as the way this one ended leaves the story wide open for more!

Do you need to read Holly’s Inbox before reading this one? No, you don’t but I’d have to say I’d recommend you do. You get the background on Holly, her family and the people she works with. You get to know her so when you start Holly’s Inbox: Scandal in the City you feel like you’re visiting with an old friend again. However this second installment stands fine on it’s own. You certainly won’t have a problem figuring out what’s going on but I warn you that you’ll love it so much that you’ll be rushing out to get the first one anyway. lol!

If you simply can’t wait to read Holly’s Inbox: Scandal in the City by Holly Denham you can order your own copy here in the US and here in Canada. Be sure to check out the website designed for Holly’s Inbox – it’s actually an inbox!

My thanks…to Sourcebooks for my eBook review copy of Holly’s Inbox: Scandal in the City by Holly Denham.

It just so happens that I have a copy of Holly’s Inbox: Scandal in the City by Holly Denham up for grabs courtesy of the fine folks at Sourcebooks. To enter…

This giveaway is open to US & Canadian residents only (no PO boxes) as the book will be shipped to the winner from the publisher. I will draw for the winner on Sunday, September 5/10. Good luck to you all!