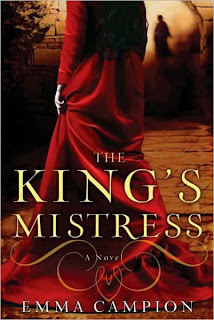 The King’s Mistress by Emma Campion is a historical fiction novel about Alice Perrers who was the notorious mistress of King Edward III. Alice had always been painted as a harlot of low birth who bewitched the King. Emma Campion looks further and gives Alice the life she might have had. Alice stayed with the King for fifteen years of her life enjoying the good times and nursing him through the bad.

Not much is known about Alice but Emma Campion portrays her as a woman caught up in a life where she never really had much control over her own future. Throughout the novel Alice will say, ‘When had I the choice to be other than I was?’ From the time Alice was born her life was being mapped out for her first by her parents and later by the men in her life.

At fourteen years old Alice is married to Janyn Perrers, a merchant chosen by her father of course to better improve his own business interests. Even though Janyn is much older than Alice and she misses her family and best friend Geoffrey terribly, they end up finding happiness with each other and soon enough have a daughter. However all is not as it seems and soon Alice learns that her husband is first and foremost answerable to Isabella, the Queen Mother. It seems his whole family is – there is some deeply buried secret that has drawn the Perrers family to the royal family.

Alice’s husband has been keeping many secrets from her, the biggest being that he’s been busy planning a life for her at King Edward III’s court in order to keep her and their child safe. When Janyn mysteriously disappears Alice’s life as one of Queen Philippa’s ladies begins. It doesn’t take long before Alice is noticed by the King and finds herself caught up in the whirlwind of life as his mistress and all it entails.

Alice is torn as she feels loyal to Queen Philippa but at the same time she is falling in love with the King. When she learns that her relationship with the King almost seems planned out by them she falls headlong into it. Alice is known for being intelligent; something her father instilled in her when she was a girl and this ends up being a detriment to her in the long run as many believed her to have used her intelligence to sway the King in many decisions.

I’ve never read anything on Alice Perrers before and I enjoyed this fictionalized account of her life. Emma Campion has done a lot of research to bring this story alive for readers. The details of court life, the gowns and generally just how life was for women back in this time period are excellently portrayed. The only complaint I had with this novel was that I found it slow going at times. I wouldn’t say boring but slow with detail of all that was going on during Edward III’s reign as King. This however didn’t dampen my enjoyment of the novel and I really look forward to reading more of Emma Campion’s work.

I read The King’s Mistress by Emma Campion as part of her book tour with TLC Book Tours. You can check out all the tour stops for The King’s Mistress here. Be sure to pop in and visit Emma Campion’s website as well. If you can’t wait to read the book you can buy your own copy here in the US and here in Canada or, for now, you can see below and enter to win yourself a copy.

My thanks… Lisa with TLC Book Tours and the publisher for my review copy of The King’s Mistress by Emma Campion.

I have 1 copy of The King’s Mistress by Emma Campion to share with my readers. To enter…

This giveaway is open to US & Canadian residents only (no PO boxes) and I’ll be drawing for the winner on Sunday, August 29/10. Good luck everyone!