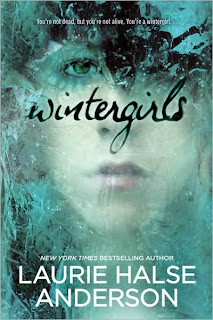 Wintergirls by Laurie Halse Anderson can best be described as a haunting and powerfully written novel. I know this book has been reviewed so many times but I’ve only now gotten around to reading it and I’m glad I did. It’s a disturbing look into eighteen-year-old Lia’s life – the life of an anorexic.

Lia wants to be thin – so thin that she disappears and her body is breaking down and dying because of it. She’s been hospitalized before, yet the power that wanting to be thin has over her mind is so strong that Lia can’t see the damage being done to her body and soul.

The book begins with the death of Lia’s ex-best friend who dies in a motel room all by herself. They haven’t talked in months but on the eve of Cassie’s death she tries phoning Lia several times – 33 times to be exact; a fact that leaves Lia feeling quite guilty. The two girls had been friends since grade school and they were also bonded together in their quest to starve themselves. It was a competition of sorts to see who could lose more or to what lengths they would go to lose the weight.

Everyone is worried that Lia will take a downwards spiral after the death but she continually tells everyone she’s ok, that she’s handling it. Really she isn’t though and her eating habits begin to take a dangerous turn again. Her stepmother weighs her regularly but like many with eating disorders they learn ways to mask their weight and Lia is no different, sewing quarters into her robe to make it heavier. To make matters worse Lia is being haunted by Cassie’s ghost and not in a good way. Even in death Cassie is encouraging Lia to push the boundaries further; to take herself closer to death and then they can be together again.

This novel is written in such a way that it really puts you into Lia’s life – literally into her thoughts and they are scary. She hates herself so much and is so unhappy that it’s very heartbreaking to read as she not only starves herself but she’s a cutter as well- anything to try to stop her pain. After a particularly scary episode in a motel room by herself, Lia has to decide what’s important to her – to continue on her quest to be the skinniest girl around and join Cassie in death or to choose life and move forward.

What I really liked about this book is that it is not sugar-coated in any way. It’s real and it’s in your face and shocking in how scary Lia’s thoughts about herself are. This is an all too real problem with young girls especially and I can only imagine how hard a book such as this could impact them and possibly help them. They aren’t alone in their struggles and as Lia says it’s small steps forward – there is no cure but there with one step at a time, there may be hope.

“Dead girl walking,” the boys say in the halls. “Tell us your secret,” the girls whisper, one toilet to another. I am that girl. I am the space between my thighs, daylight shining through. I am the library aide who hides in Fantasy. I am the circus freak encased in beeswax. I am the bones they want, wired on a porcelain frame. (pg 24, eBook edition)

Disclosure…my eBook copy of Wintergirls by Laurie Halse Anderson purchased by yours truly.