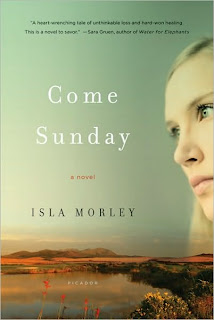 Come Sunday by Isla Morley is a very moving novel. It is the story of one mother’s grief over the loss of a child, the loss of herself, the past, and the journey towards rediscovering life even when you feel sure it’s over. Come Sunday I am quite sure will be one of my favorites of this year. This story broke my heart yet there was no way I could put it down until I came to that last page. It is one of those stories you just don’t forget and it is undoubtedly one that will have you reaching for the box of tissues.

Abbe, born and raised in South Africa, is now living in Honolulu with her husband Greg, a pastor, and their three year old daughter Cleo. Abbe is at the point in her life where she’s feeling more than a little overwhelmed. Cleo is a handful and she feels her husband just doesn’t see her anymore. In an attempt to spend time together they head out to a movie and take Cleo to the babysitters. In an instant, whether you’re there or not, tragedy strikes. Cleo is hit by a car and killed. Life quite literally stops for Abbe – she doesn’t know how to go on and live a life that doesn’t include being Cleo’s mother.

Abbe is understandably angry. She is lashing out at everyone and everything. Someone has to be to blame for Cleo’s dying yet the accident was just that- an accident. She doesn’t want to eat and spends most of her time in a drug induced sleep while the rest of her time is spent wishing she were dead as well. While her husband Greg turns to God for comfort, Abbe refuses to go to church having her faith in God completely rocked by Cleo’s death. With Abbe not stopping to realize that Greg has lost his daughter as well and pushing both him and God away, her marriage completely falls apart.

The one thing Abbe doesn’t want to do is lose her house in Honolulu yet she doesn’t have the money to keep it. What she and her brother do have though is a farm in South Africa that she has in the past been unwilling to sell – that has changed now. She takes a trip out to South Africa to see about signing the papers and while there confronts her past – her abusive father, her mother who just couldn’t stand up to him, her grandmother, and a witch doctor named Beauty.

The secrets she unearths while there bring her so much closer to understanding her mother – to knowing that her mother loved her and would do anything for her as any mother should. In coming to learn who the woman her mother really was Abbe finds a way to begin to heal her own broken self and she finds that she can forgive – others and herself.

I liked the character of Abbe; maybe because like Abbe I deal with things that really upset me with anger as well. No it’s not at all productive and it doesn’t really make you feel any better but it’s who I am. I felt her pain and I felt her anger. I cried tears with her and I rejoiced with her when she began to find her own way again.

Come Sunday is beautifully written. There were many parts that I just had to reread so I could get even more of a picture in my mind. She writes such vivid descriptions of both Honolulu and South Africa that I felt I was there feeling the heat or seeing the landscapes. This isn’t necessarily an easy book to read – there is real grief here that you will feel in the pages but I have to say that this shouldn’t stop you from reading this beautiful book. Ultimately through forgiveness this novel offers hope and promise.

Come Sunday is available to purchase here in the US and here in Canada. You can also find Isla Morley on Facebook and on her website – be sure to check out both! Please pop by tomorrow as Isla will be joining us here at Peeking Between the Pages with a guest post!

Disclosure: My review copy of Come Sunday by Isla Morley was provided by Diane Saarinen and Picador.