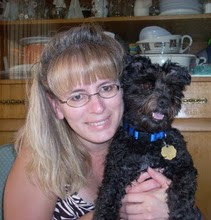 Hi everyone, it’s been ages since I’ve posted and other than this week coming up my posting may still be pretty erratic.

Unfortunately towards the end of October Buddy took a turn for the worse and wouldn’t eat at all – it went that way for almost a month before – and it’s been a battle since. He was in the hospital for 4 days getting IV fluids and he was just so forlorn and depressed that I was worried that he wasn’t even going to make it past the fluids. I talked with the vet and we decided that he would get something called SubQ fluids instead which are fluids given just under his skin daily. In addition he’s getting antibiotics and anti nausea meds. He’s finally started eating a bit but not enough to keep him going without the fluids.

It’s been a heartbreaking time for us. It’s extremely difficult to watch him lose weight, not want to eat and just generally not be the dog I’ve always had. He’s tired a lot and sleeps quite a bit but when he’s awake he’s generally in pretty good spirits. The vet doesn’t think he’s in pain and he doesn’t usually act like he is – although sometimes he does when his tummy hurts. To watch him go downhill has to be one of the hardest things I’ve gone through. I had hoped for more time with him feeling better. Now I just hope for more time. I won’t let him suffer if it comes down to that but saying good bye to my puppy will be the hardest thing I will ever do.

Needless to say my blogging has been nonexistent. I just had no time – I was and still am exhausted -I’m not sleeping or eating well – and my concentration level has been pretty low. It just doesn’t seem important considering everything else going on. I have been reading some though and this week I will have reviews up all week. I have a few others to write for the week after if I can get time when Buddy is sleeping or we aren’t running around to the vet’s office. I’m not entirely sure where my blogging will take me when this is all over but my plan is to go back to when I first started this blog and just read and review things I want to and talk about them.

For now my blogging may be sporadic as I want to spend all the time I can with Buddy. I want to make sure I do all I can for him and keep him as happy and comfortable as I can. He’s my baby – those of you who follow my blog know that. You all know what he means to me and know how devastated I am by his illness. My heart breaks everyday but I’m very grateful for every extra minute and kiss I get from him.

Those of you who are the praying kind – I would appreciate prayers for my little guy. If I could even get 6 months with him – a year would be the best gift ever. I just want more time to love him and have him with me.

Thanks to those of you who have left messages here on my blog and those who have emailed me personally. You are all special people and I feel blessed to call you my friends.