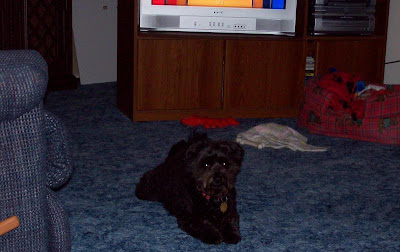 One day 8 years and 5 months ago I walked into a pet store to find myself my very first dog. I walked over to the where the dogs were and there were these two gorgeous little black balls of fluff. The black balls of fluff were brother and sister and as I walked up to the cage I looked right into the eyes of the one who had both paws up on the window looking up at me. The clerk got him for me and put him in my arms- he snuggled in – and that’s how the little black ball of fluff named Buddy came to be my best friend and the true love of my life.

Those of you who read my blog regularly have seen so many pictures of Buddy over the years and were treated to stories as well. You also know that in April of this year he became sick – he had both kidney and liver failure- he didn’t have a chance right from the beginning. In September he spent some days getting IV fluids all day in the hopes of flushing his system so that he’d start eating again. Then we started doing SubQ fluids to keep him hydrated along with his meds. He started eating some – not enough – but it was enough that my hopes soared. The only problem is that with kidney/liver problems eating causes the waste levels to go up in the blood. So Buddy started to feel sick again from eating and consequently stopped again.

This past Sunday he started really not feeling good. He was breathing funny and just not himself. I took him to the vet on Monday and they made sure he was stable- I then saw my vet on Tuesday. The bad news came that day – the best thing I could do for my little man would be to put him down. He wasn’t going to get better no matter what else I tried and the only thing keeping him alive was the fluids. He had already lost a lot of weight – he went from a chubby 19 lb dog to 12.4 lbs by the end. I knew that the vet was right in my heart – since April my little man had lost his spunk and spark. He didn’t want to play anymore or have treats. At first his weight loss was gradual but this past week it wasn’t. I saw the changes happening over these months – I just wanted to pretend they weren’t there until I really couldn’t ignore them.

It was with an extremely heavy heart that I took my baby boy in last night to be put down. The night before he had such a bad night – he whimpered and cried most of the night. The vet told me to bring him in right away and he’d have a look at him and again told me that there was nothing I could do to make it better. He told me I had already done anything and everything possible to give my baby a bit more time. I had decided to take him home for the day and that was probably selfish because he would whimper and cry when he’d move or we’d pick him up. The night before and yesterday were horrible and I could not let him go through that again even though I didn’t want to let him go. We took him in the evening and I asked the vet again if he was sure I was doing the right thing and he said yes again. It was peaceful for Buddy- he actually licked my tears and kissed me before – something he hadn’t felt like doing this past week. I will never be able to forget though – it was the hardest thing I’ve ever done and even though I know I did what was best for him, I still feel guilty for doing it and wish I hadn’t. I’m glad I got to hold him through to the very end and I really hope he knew I was there still loving him.

My heart is broken. I hurt so bad that I can barely function – I never thought that anything could hurt as bad as this does. More than anything in this world I want my little Buddy back. I want to hold him in my arms again and kiss him. I want him back as he was -happy and healthy- the puppy I’ve shared all these years with you. I’m not yet sure how to go on without him. The house is empty and everywhere you look you can see Buddy. I’ve cried so many tears that I would think there were none left but there are.

I have to say a special thank you to my Page Turner friends. We started out as a book club many, many years ago and have gone from that to just best friends. So many of them have supported me with their love over the miles yesterday and today and for that I am very grateful. My bloggy friends who have come to mean so much to me – Staci, Kaye, Carla, Janel, Bonnie, Heather – you are awesome ladies and friends. Thank you so much for your continued emails of support. I have a special thank you to an author who has become a friend – Helen Hollick – you are a lifesaver my friend and I appreciate your care and support more than words can say.

I had to say good bye to my best friend last night. I don’t think I’ll ever heal right now and I don’t know how I’m going to live without Buddy. I never had kids – he was my kid and I loved him with abandon. I gave every ounce of love I had and more to him and I got it back tenfold. I will and do miss him more than words can possibly express. He will be in my heart forever and at this point I just want him back. I want to be able to hold him in my arms one more time and kiss him.

I hope you are in peace and no longer in pain Buddy. I miss you so much and I love you so much it hurts. You were my best friend, my little man and my special angel. I will love you forever and I hope I get to see you one day again…Mommy. 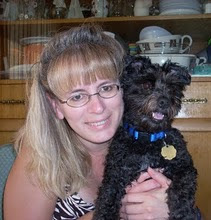