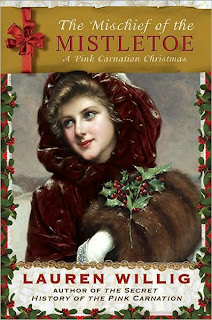 The holidays are almost upon us everyone and I’m very excited to offer up a great giveaway to my readers – I have 2 copies of The Mischief of the Mistletoe by Lauren Willig, being released on October 28/10, and 2 uniquely designed Mischief of the Mistletoe holiday ornaments perfect for any Christmas tree up for grabs! I know a few of you are followers of Lauren Willig’s Pink Carnation series and have enticed me into wanting to read them as well. I have the first few books on my eReader ready to go and I hope to delve into them soon.

The Mischief of the Mistletoe by Lauren Willig sounds delightful. Here’s a bit about the book from Lauren Willig’s website:

Arabella Dempsey’s dear friend Jane Austen warned her against teaching. But Miss Climpson’s Select Seminary for Young Ladies seems the perfect place for Arabella to claim her independence while keeping an eye on her younger sisters nearby. Just before Christmas, she accepts a position at the quiet girls’ school in Bath, expecting to face nothing more exciting than conducting the annual Christmas recital. She hardly imagines coming face to face with French aristocrats and international spies…
Reginald “Turnip” Fitzhugh—often mistaken for the elusive spy known as the Pink Carnation—has blundered into danger before. But when he blunders into Miss Arabella Dempsey, it never occurs to him that she might be trouble. When Turnip and Arabella stumble upon a beautifully wrapped Christmas pudding with a cryptic message written in French, “Meet me at Farley Castle”, the unlikely vehicle for intrigue launches the pair on a Yuletide adventure that ranges from the Austens’ modest drawing room to the awe-inspiring estate of the Dukes of Dovedale, where the Dowager Duchess is hosting the most anticipated event of the year: an elaborate 12-day Christmas celebration. Will they find poinsettias or peril, dancing or danger? And is it possible that the fate of the British Empire rests in Arabella and Turnip’s hands, in the form of a festive Christmas pudding? 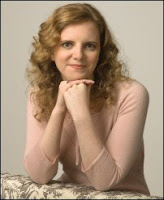 A native of New York City, Lauren Willig has been writing romances ever since she got her hands on her first romance novel at the age of six. Three years later, she sent her first novel off to a publishing house—all three hundred hand-written pages. They sent it back. Undaunted, Lauren has continued to generate large piles of paper and walk in front of taxis while thinking about plot ideas.

After thirteen years at an all girls school (explains the romance novels, doesn’t it?), Lauren set off for Yale and co-education, where she read lots of Shakespeare, wrote sonnet sequences when she was supposed to be doing her science requirement, and lived in a Gothic fortress complete with leaded windows and gargoyles. After college, she decided she really hadn’t had enough school yet, and headed off to that crimson place in Cambridge, Massachusetts for a degree in English history. Like her modern heroine, she spent a year doing dissertation research in London, tramping back and forth between the British Library and the Public Records Office, reading lots of British chick lit, and eating far too many Sainsbury’s frozen dinners.

By a strange quirk of fate, Lauren signed her first book contract during her first month of law school. She finished writing “Pink Carnation” during her 1L year, scribbled “Black Tulip” her 2L year, and struggled through “Emerald Ring” as a weary and jaded 3L. After three years of taking useful and practical classes like “Law in Ancient Athens” and “The Globalization of the Modern Legal Consciousness”, Lauren received her J.D. magna cum laude from Harvard Law School. For a year and a half, she practiced as a litigation associate at a large New York law firm. But having attained the lofty heights of second year associate, she decided that book deadlines and doc review didn’t mix and departed the law for a new adventure in full time writerdom.

This giveaway is open to US & Canadian residents only (no PO boxes) and I will be drawing for the winners on November 6/10. Good luck everyone!