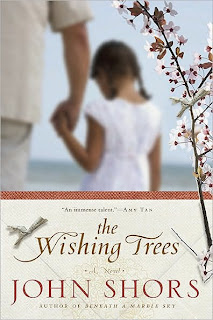 It is my great pleasure to welcome John Shors to Peeking Between the Pages today. I had the pleasure of reading John’s latest novel, The Wishing Trees, and reviewed it yesterday (my review). As with his previous novel, Dragon House, John Shors is trying to do good with his newest, The Wishing Trees, as well. His guest post tells the story behind the novel and just what he’s doing this time to help others. Sit back and enjoy… The Magic of Wish Trees…

Almost twenty years ago, after graduating from college, my best friend and I decided to travel to Kyoto, Japan, to teach English. We had heard that foreign teachers were in high demand and, seeking an adventure, we headed off to a country that neither of us had experienced. We couldn’t speak Japanese, didn’t have jobs, and had very little money.

I ended up living in Japan for about three years. Ultimately, I saved up enough money that I was able to then backpack around Asia for another year. These travels have become the catalyst for my novels in that I was strongly influenced by the places and people and cultures I came in contact with.

My most recent novel, The Wishing Trees, was inspired by my time in Japan. I lived near an ancient temple complex, and often walked through its grounds and reflected on my life and my future. Beside a koi-filled pond rose an old cherry tree that the Japanese considered a “wish tree.” Throughout the year, the tree was inundated by thousands of paper wishes that people had tied to the tree. The wishes could be directed toward one’s god or gods or ancestors.

I discovered Wish Trees all over Japan. Some were massive and ancient. Others were young and practically bent over by the weight of all the paper wishes. From the distance, the wishes resembled white flowers. From a few feet away, it was possible to read some of the wishes without touching them. People asked for health, for peace, for a better job. The trees were treated with great reverence. Gardeners used bamboo poles to brace heavy branches against the wind, and the ground beneath the trees was constantly swept clean of debris. Meanwhile, month after month, year after year, the wishes fluttered, and hopefully, were fulfilled.

I always enjoyed the notion of one’s ancestor or god seeing a wish tied to a tree and making that wish come true. The concept was elegant, mystical, and deeply spiritual. After I left Japan, I researched Wish Trees and was surprised to discover that different cultures from around the world had similar versions to what was done in Japan. In Scotland, for centuries people have hammered coins into the trunks of hawthorn trees, made a wish, and then watched that coin as the years passed. In Hong Kong people used to write down a wish on a piece of paper, tie that paper to an orange, and then throw the device into a wish tree in hopes of their wish becoming entangled on a high branch.

I think that what I like most about Wish Trees is the combination of the spiritual and the natural worlds. Trees surely are one of the most magnificent of all creations and the thought of having a wish affixed to such a powerful and majestic and living thing is comforting to me, and to millions of other people around the world.

Two years ago, my family dedicated our own Wish Tree. It’s a middle-aged locust tree, and it’s now covered with about twenty paper wishes. All but one of these wishes have come true, and I’m holding out hope that this wish will someday be granted. Our children delight in the tree. A few weeks ago, we lost our beloved cat, and after a long search failed, our daughter hurried out and tied a wish to our tree. The next day our cat was back at home.

Given the rampant deforestation around the world, and how this is one of our most pressing problems, my hope is that the concept of wishing trees spreads, and that people go out and plant their own wish tree. This hope is one of the main reasons that I wrote The Wishing Trees, which is the story of a father and a daughter who travel around the world (after the death of their wife/mother), leaving wishes in trees. I have partnered with the Arbor Day Foundation and will donate a portion of the proceeds from my novel to this group in hopes of getting thousands of saplings planted.

If there is a beautiful tree in your yard or in a nearby park, you might think of it as a Wish Tree. You might tie a small piece of paper to a branch, watch it flutter in the wind, and wait to see what the future holds.

John Shors is an internationally bestselling novelist. For more information on his work, please visit www.johnshors.com.

Almost a year after the death of his wife, Kate, former high-tech executive Ian finds a letter that will change his life. It contains Kate’s final wish – a plea for him to take their ten-year-old daughter, Mattie, on a trip across Asia, through all the countries they had planned to visit to celebrate their fifteenth anniversary.

Eager to honor the wife and mother they loved, Ian and Mattie embark on an epic journey that retraces the early days of Ian’s relationship with Kate. Along the way, Ian and Mattie leave paper “wishes” in ancient trees as symbols of their connection to Kate and their dreams for the future. Through incredible landscapes and inspiring people, Ian and Mattie are greeted with miracles large and small. And as they celebrate what Kate meant to them, they begin to find their way back to each other, discovering that healing is possible and that love endures – lessons that Kate hoped to show them all along…

John’s first four novels, Beneath a Marble Sky, Beside a Burning Sea, Dragon House, and The Wishing Trees, have won multiple awards, and have been translated into twenty-five languages.

John, thanks so much for sharing your story with us. I’m glad your cat came home safely after tying a wish to the tree – how wonderful! I am already looking forward to your next novel John!

Again, you can pick up your own copy of The Wishing Trees by John Shors here in the US and here in Canada!