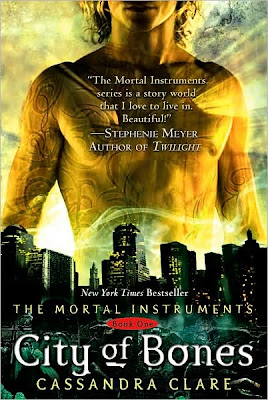 City of Bones by Cassandra Clare was a great read for me. After Buddy passed I needed books that I could escape into, even if only for a little while. I didn’t want anything I had to think to hard about and City of Bones was just that for me. It’s the first book in The Mortal Instruments series and it’s already been reviewed countless times but I’ll add my own thoughts to the pile.

At the beginning of the book we’re introduced to Clary Fray who by all accounts is just a normal teenage girl or so she thinks. One evening she heads off to a club with her best friend Simon and ends up finding out that she can see people that no one else seems too. Clary, not being one to skip investigating something strange, of course heads on after the people that only she can see and manages to see them killing another kid. To top it off these teenagers she sees murdering this kid are covered in all kinds of strange markings. Clary doesn’t know it yet but she’s been introduced to the world of the Shadowhunters.

Shadowhunters have one purpose and that’s to rid the earth of demons and to keep the werewolves and vampires in line. Upon meeting the Shadowhunters – Jace, Alec and Isabelle, Clary finds herself quite taken with the more than gorgeous Jace. Later when Clary heads home it’s to find her mother has disappeared and Clary herself is attacked by a monster. Thankfully Jace is with her and she doesn’t end up as a demon’s dinner.

However this opens a whole new world to Clary – the world of the Shadowhunters. It also opens up Clary to finding out that she herself has the Sight and is a Shadowhunter which in turn leads her to the upsetting knowledge that her mother has been lying to her all these years. As Clary thinks back it makes more and more sense to her as to why her mother was always so overprotective of her. Clary is immersed on a journey of trying to find her mother and trying to figure out just who and what she is.

I really liked the characters in this novel – there wasn’t anyone I can say I didn’t like. I liked the Shadowhunters – Jace, Alec and Isabelle. Jace of course is the one that all the girls moon over, Alec is the quiet one, and Isabelle is one of the first girls to fight as a Shadowhunter and she’s pretty impressive. Clary though is my favorite character. With all that she was faced with and all that she learned about herself, she still remained strong. She didn’t run from anything but faced it head on although sometimes at great danger to herself.

City of Bones definitely had me turning the pages quickly to find out what was coming next. I’m really looking forward to getting involved in the next novel – City of Ashes. I love when I know I have a few books in a series to read especially when I’m loving it. Be sure to check out Cassandra Clare’s website to learn more about The Mortal Instruments series.

My copy of City of Bones by Cassandra Clare was purchased by yours truly.