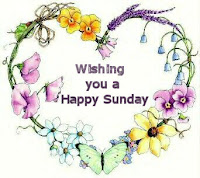 Good Sunday morning everyone! Well it’s been one heck of a week. I guess I don’t remember just how much work a puppy can be because Sammy is wearing me out. By the time 9pm rolls around, I’m ready for bed. He never quits. I thank my lucky stars when he finally naps because the rest of the time is a battle – lol.

He’s quite the character though. He loves chasing his tail and it’s pretty funny. I tried to get a picture but it didn’t work for this week so maybe next week. He’s a complete brat outside. His new game is running laps through our garden and it’s impossible to catch him. We definitely need to break him of that because we don’t need him in the garden in the summer. He puts everything in his mouth outside, including dirt, and then runs away from me so I can’t get it out.

Sammy has a list of offenses that is huge. This post would be too long for you all to read. lol. We have had to put gates up to all the bedrooms because he will go in and get under the beds and chew what he can find or try to pull the blankets off the bed. He tries to pull the mat out from under his food bowl and I already had to take the one out from under his other water bowl in the house because he was pulling it up and dumping the water. His other new thing to do is when he has to pee he goes running a hundred miles an hour to his pee pads but I manage to catch him and take him outside. The only time I don’t is when he sneaks off on me but at least he’s being good and going on the pee pads at least. Oh and lest I forgot Sammy’s biggest offense is that he likes to chew my books! Yes I did say books – uggggggggggggggggh!!! As you can see there is never a dull moment in the adventures of Sammy.

What else is going on – let’s see in reading I’ll have a few reviews out this week. I have a few tours for TLC Book Tours that I didn’t get to in November that I’m now catching up on. I feel so bad for having missed my tour dates but I was in no shape to write reviews. Then I still have some reviews for the books I was reading that are mostly fluff reads from last month. Right now I’m reading a few books – I have so many started that I’m amazed I can keep track of them. I’m focusing this week on finishing up Outside the Ordinary World by Dori Ostermiller and The Forever Queen by Helen Hollick.

Now for some pictures of my sweet little monster… 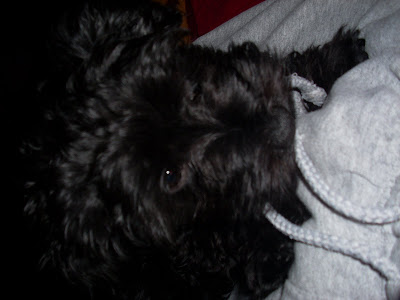 This is Sammy trying his hardest to chew on the tie of my pants. He will literally pull it and I mean hard to try to get it out of my pants. He’s nothing if not extremely determined. 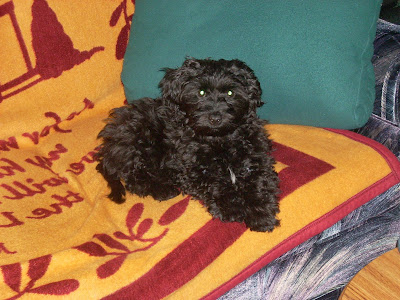 I put this blanket out on the couch when Sammy first came home because it’s nice and soft. Now he will not lay and sleep on the couch without it so I guess it’s there to stay. 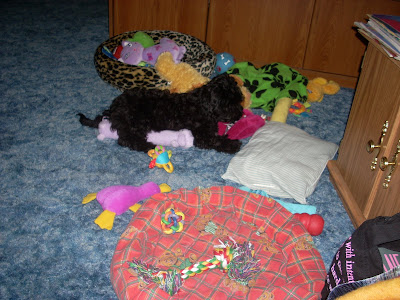 As you can see Sammy has no shortage of toys and he will have yet more today as I plan on hitting PetSmart to buy him more. More as in some kind of chew toys and you will know why in the next picture. 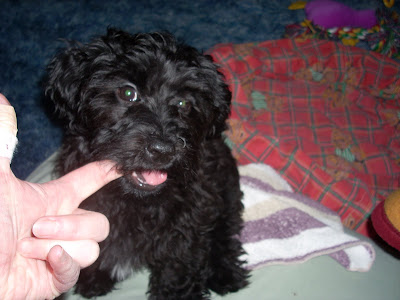 Yes, Sammy considers Mommy his very own personal chew toy. Heck I guess the bones on my hand are just as good as any I’ve bought him to chew. As you can see I have a bandage on my thumb where I lost a wrestling match for my pants last night. Anyhow, isn’t he the cutest in this picture?

Well that’s all for this week. I’ll make sure to get one of him chasing his tail for you next week- actually a video would be great. So what’s everyone up to – did you do anything this weekend or just having a relaxing time? I hope you all have a great week – reading and otherwise!