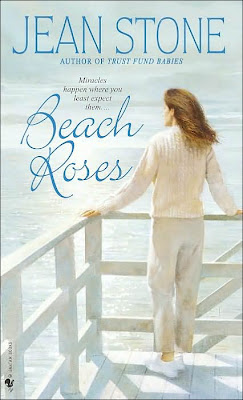 Beach Roses by Jean Stone was one of those books with the type of story I love. I read it with a few of my reading pals – Millenia & Nancy, from my book club The Reading Cove. Needless to say I really enjoyed it – it might have been a bit heavy for the Christmas season but that didn’t deter me in the least. It’s a sappy story but rich in the meaning of hope and moving forward.

Beach Roses takes place on Martha’s Vineyard and follows the lives of three women with breast cancer: Katie, Faye, Hannah and Rita; the woman asked to run a support group for them even though she’s never had cancer herself. She doesn’t really want to run this group but she’ll do pretty much anything for Doc Hastings so she agrees. Thus begins the journey that these women take that leaves them with the knowledge that sometimes it’s those we least expect to be there that are. They pull us from the deepest ends of sorrow and make our hearts lighter even if just by a little bit.

Katie is a rock star who at just over twenty years old finds she has breast cancer and is pregnant on top of that. She has to decide to do what’s best for her baby and herself. She is hit with a lot as she learns of betrayals from those she thought were the very people who cared about her. Will she learn to stand on her own feet and fight back? Will she be able to mend past relationships and learn to love again?

Hannah is a housewife who is harboring secrets of her own from her younger years. Hannah is one of those women who is always so concerned about caring for others that she forgets that she needs some tender loving herself. She is also the one woman in the group with the most advanced stage of cancer. Will she be around to see her kids grow up? Will she ever be able to realize her own dreams?

Faye could be considered the stuck up one of the bunch. This is her second round with breast cancer and she feels that this time is the end. She is also the most standoffish – she really doesn’t want to get involved with all of this. Faye is also living with demons of her own from her past to do with her children – one of which she doesn’t even know where to find him. Will she open herself up to the group – to these women? Will she find her son and mend the fences broken between them?

Rita was the one I liked the least although I did like her determination in protecting these women once she got to know them. She also really opened herself up throughout the story to these women and I liked that. However, she’s done a lot of things that she isn’t proud of and unfortunately for her one of them hits her in the face when she begins running the support group. Will she face up to what she did? Will she be forgiven?

This is a heartwarming story of the friendships and bonds that women form; sometimes when they least expect it. These women bonded over cancer but then it became so much more. It became about their families, hopes, dreams and the sharing of their innermost beings – those you just don’t often share with others. They supported each other through it all and it really turned out to be a story which warmed the heart and offered hope and love – I so enjoyed this book!