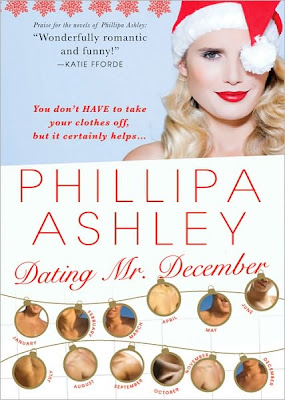 Dating Mr. December by Phillipa Ashley is the kind of book that you go to when you need a light and fluffy read laced with a flirty romance and a good dose of hanky panky! Every once in a while I need to sit down and lose myself in some good chick-lit and Dating Mr. December filled that need perfectly.

Emma has been kicked and tossed around a lot lately. She lost her boyfriend to her boss and consequently lost her job. So, what does she do? She leaves London and heads for the boonies of Cumbria to work instead and just get away from it all. What’s she going to be doing? Well the first order of business is getting a bunch of down home kind of guys to agree to do a calendar — with not a whole lot of covering up going on if you catch my drift — to raise money for a new base camp that they desperately need. The men seem responsive to the idea — all but Will — the most ruggedly handsome man she’s seen in a while.

Will is very opposed to the calendar but agrees since he’s all for supporting the team not to mention that Emma seems to set his heart to pounding. It seems though that he and Emma keep butting heads at every turn and managing to spur each other on without even trying hard. Not to mention that they both seem to be making eyes at each other without either of them knowing it. Now the thing is that Emma has been hurt enough. She’s certainly not going near another man for a while and certainly not one that seems to have the reputation of a love em’, leave em’ kind of guy. Then there’s Will who has this hard exterior but maybe is a lot softer than most think – is he hiding a few deep hurts himself that make him leery of falling for anyone?

Try as you might in a small town it’s hard not to get thrown together and to top it off Emma and Will do seem to have some serious sparks flying between them. Emma doesn’t want a broken heart again though but Will keeps doing things that make her think that maybe there is a chance for them. Will she open up and give the relationship a chance? Is there even a relationship to worry about? Then there’s Will – is he willing to give up his wild ways for Emma? Or does he want his space and freedom, thereby breaking Emma’s heart again?

Dating Mr. December by Phillipa Ashley is great for those who love chick-lit or romance. I enjoyed it although did find it a bit slow in some parts. However the author’s witty dialogue had me laughing more than once and the storyline did keep me interested to the point where I needed to know what was going to happen. It’s a good read for this time of year when people are busy and just want something cute and light that they can lose themselves in for a little while. Keep in mind though that this book has nothing to do with Christmas even though you might think so from the cover.

You can pick up your own copy of Dating Mr. December by Phillipa Ashley here in the US and here in Canada. Be sure to check out Phillipa Ashley’s website as well!

My review copy of Dating Mr. December by Phillipa Ashley was provided by Sourcebooks.