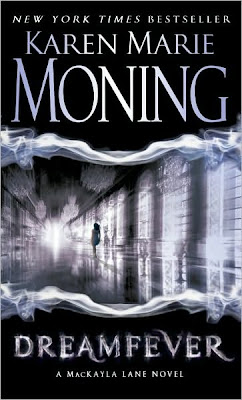 Dreamfever by Karen Marie Moning is the fourth in the MacKayla Lane series. This series has kept me hooked from the beginning with all the twists, turns and action always keeping me on the edge of my seat. My only complaint is I don’t yet have Shadowfever and I’m dying to know what happened after those last few lines I read in Dreamfever left me speechless. Just a warning: there may be an unintentional spoiler as it’s hard to review a fourth book without talking a bit about the previous ones.

This installment finds Mac learning even more about her past and her bloodline. It picks up right where Faefever leaves off so you don’t feel lost or confused at all. Dreamfever finds Mac leading quite the life in the beginning but I won’t go further with that as it’s best read, not told. I will say though that the beginning of this book is not for the faint of heart. However I will say that Barrons tries his best to get Mac back to the world of the living.

Once Mac is ‘back’, she is on a mission to find out more about herself and fight the dark powers that be that have destroyed what she’s come to think of as her city. Mac has really grown from the beginning of the series and it’s nice to see. She’s strong, courageous, and now she’s willing to accept help in her mission to fight the dark powers. Previously Mac thought she could do it all – she didn’t need anybody. I also love that she’s befriended Dani – a thirteen year old sidhe-seer. I like that she’s taken her under her wing even though Dani is quite capable of surviving most of the time on her own. It’s a nice touch in the series.

So Mac is pretty much where she has been in all the other books – still seeking out the Sinsar Dubh (the dark book). However we are left with a cliffhanger of epic proportions in this book and I almost wish I hadn’t read Dreamfever yet so I could have just moved on to the fifth and final book, Shadowfever, when I did. I’m hoping in the last installment that first I’ll get the answers to what happened in Dreamfever and secondly that all the unanswered questions of the whole series will finally be addressed. I can’t wait!

I read Dreamfever by Karen Marie Moning for her book tour with TLC Book Tours. Be sure to check out the other tour stops here to see what others are saying about this fantastic series. You can also pop in and visit Karen Marie Moning’s website which is awesome. If you’re so inclined you can pick up your own copy of Dreamfever here in the US and here in Canada but you’d be much better off starting from the beginning of the series. You won’t be sorry!

My copy of Dreamfever by Karen Marie Moning provided for review from TLC Book Tours and the publisher.