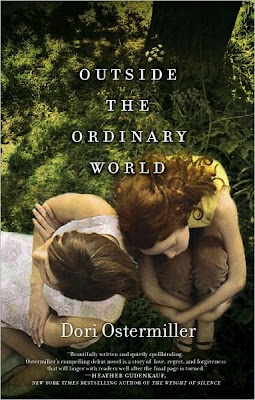 Outside the Ordinary World by Dori Ostermiller is a novel that at it’s core I think is about the bonds between mothers and daughters and how what happens in the past often comes back to haunt the future.

Sylvia Sandon is a wife to Nathan and a mother to Hannah and Emmie. She’s overwhelmed with the demands of her daughters, an artistic career presently going nowhere, and a marriage which is in trouble. It seems that she and Nathan have lost that spark that used to keep their marriage alive. Sure it can be the fact that they have kids now, they are both busy, or can it be she just doesn’t care anymore. Then one day when she takes the kids into town she meets Tai Rosen, father to one of her art students, and she’s more than intrigued. Yet…she always said she would never become her mother…

To better understand Sylvia you have to go back to her childhood which was far from normal. Her own parents had a very rocky relationship and Sylvia’s father was prone to very violent outbursts towards his family. Her mother carried on an affair with a married man for years and very selfishly involved her daughters in the secrecy of this affair. As well Sylvia’s mother had a very different kind of relationship with her – she treated Sylvia as a confidant instead of a daughter. She put pressures on Sylvia that no mother should. Sylvia saw what this affair did to her family as it literally destroyed them.

Sylvia swore to herself that she would never let this happen to her family and yet when Tai came into her life she began to sway. She was unhappy and frustrated and Tai made her feel better about herself even while she was consumed with guilt. In the short time of their tryst, very explicit emails went back and forth and Sylvia became more distant from Nathan. Nothing stays the same for long though and the walls fall down when Sylvia’s oldest daughter Hannah learns of the affair. Now Sylvia has put her own daughter in the same position she was as a young girl – keeping a secret that no child should ever have to keep for a parent.

Outside the Ordinary World by Dori Ostermiller is an emotionally charged novel that at times has you cringing at Sylvia’s childhood and then frustrated with her decisions as an adult. I don’t condone infidelity in any way but this novel me me wonder about the reasons why – could Sylvia’s upbringing have had anything to do with the fact that she fell into the affair? That’s what I asked myself as I read the novel and I guess for me I don’t know – if you haven’t lived someone else’s life you can’t really say what decisions you might make.

This novel would appeal to anyone who enjoys women’s fiction and I think it would be a great pick for a book club as novels such as these always spark a lot of conversation. For myself I found the novel slow to start but once I got into the dynamics of Sylvia’s childhood and it’s implications I was completely drawn in and didn’t want to put the book down.

My copy of Outside the Ordinary World by Dori Ostermiller was provided for review by TLC Book Tours and the publisher.