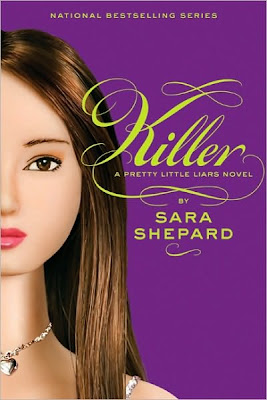 Killer is number six in The Pretty Little Liars series by Sara Shepard. I have been following this series from the beginning and will probably continue to do so. It’s a series for young adults but I’ve really enjoyed it. This series follows four young girls: Spencer, Hannah, Aria and Emily as they try to find out who this ‘A’ is that keeps tormenting them. They thought ‘A’ was revealed but it turns out that someone new has taken up stalking them and a new nightmare just might be beginning.

The premise for this series is that when the girls are a bit younger and friends with the all popular Alison, she ends up dead. It’s later discovered that she had been murdered and the girls started receiving strange and often threatening texts from an unknown ‘A’.

I’m not going to go back in the story at all, just skim what’s happening now. In this installment the girls find a dead body in the woods behind Spencer’s house which they believe to be Ian Thomas. They call the cops and go back out into the woods – no body. It’s gone. Now Ian was charged with Alison’s murder but is he really the killer? Was that really his body in the woods and if so, where has it disappeared to?

Things are changing for the girls. Spencer has found out something about her past that may have dire consequences and the other girls are all experiencing changes as well. This book seemed to focus a lot more on the girls than on the mystery of ‘A’. I missed the mystery and suspense of all the trouble ‘A’ causes but I still really enjoyed this installment. I like this series because even though these girls for the most part have more privileged lives they still experience all the same problems and insecurities as all young girls do.

Killer leaves us wondering who we can trust if anyone and the cliffhanger at the end is ‘killer’ indeed. I think I have one more book to catch up in the series and I’m anxious to find out where the story goes and what happens to the girls next!

My copy of Killer by Sara Shepard was purchased by yours truly.