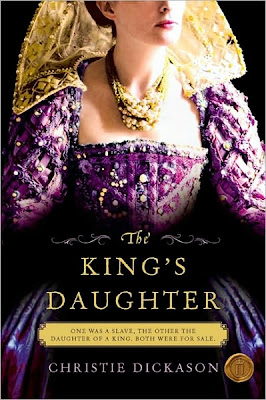 The King’s Daughter by Christie Dickason brings alive the life at court with all the treachery and betrayal that swirls through it. The King’s Daughter is about the life of Elizabeth Stuart, daughter of King James I of England and VI of Scotland, told through her own eyes.

From a very young age Elizabeth is aware of her place in the family as third in line to the throne. She would be matched in a marriage that would further benefit her father’s position. Elizabeth is kept very sheltered and away from court. Her father doesn’t want her to know anything that is going on there. Her mother has nothing to do with her. Her mother at one time tells her that there is no point in getting to know a daughter as they are soon married off and the mother’s heart is only broken if they are close. The only thing that Elizabeth truly treasures is the special relationship she shares with her older brother Henry, Prince of Wales.

King James is quite erratic and unstable at times; given to flying into rages. His biggest fear being that his children are trying to take over the throne. This is his main reason for keeping Elizabeth so secluded and for keeping Henry under his thumb as well. Elizabeth though is pretty gutsy and does at times stand up to her father especially when he threatens to marry her off to someone she can’t even stand the thought of being married to. She also, as she gets older, decides to send out spies in order to learn more about what is going on around her especially those matters to do with her. She learns many things; things about her father as well; things that finally give her more control over her own life and future.

The biggest fear Elizabeth had was that she would be married off to some old and mean man. There were many times she was put on display to would be suitors. There were a few that she outright refused to marry; standing up to her father’s rage. In this matter her brother Henry came to her rescue. He tried hard to find her a man that would make a good match for her; someone that would make her happy and succeeded. Without him, who knows who her father would have sent her off with.

I liked Elizabeth and enjoyed this novel being told from her viewpoint. Dickason weaves fact with fiction in such a way that kept me turning the pages in this book to see what Elizabeth would face next. Henry as well was a character I liked. He seemed a kind and caring prince regardless of his father. King James is painted in a bad light in this novel- he is unstable and mean; most often quite drunk.

As with most historicals I am always appalled by how little say that women had and very horrified at the young age they were married off at; most often to men much too old for them. They were used as pawns; nothing more. That a mother turned away from her children because it hurt too much to love them, only to lose them, breaks my heart and yet this is how things were. Elizabeth spent her days not knowing what would happen to her at any given moment. I was glad that she found love and a way to move forward in her life. If you’re a lover of anything historical, then Christie Dickason’s The King’s Daughter is definitely a book you’ll want to read!

My review copy of The King’s Daughter by Christie Dickason provided by TLC Book Tours and the publisher.