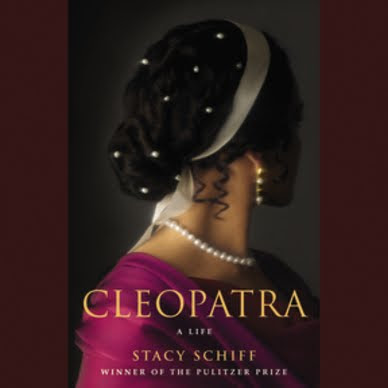 I’ve got another great audio book giveaway to share with you. I’ve got 2 Audio Book copies of Cleopatra by Stacy Schiff to share with you courtesy of Anna with Hachette Book Group. Now this is one book I really want to read and must get my hands on a copy. I really like the cover art for this one too – it’s so pretty.

Her palace shimmered with gold but was richer still in political and sexual intrigue. Cleopatra, the wealthiest ruler of her time and one of the most powerful women in history, was a canny political strategist, a brilliant manager, a tough negotiator, and the most manipulative of lovers. Although her life spanned fewer than forty years, it reshaped the contours of the ancient world.

At only 18 years old, Cleopatra was already one of history’s most remarkable figures: the Queen of Egypt. A lethal political struggle with her brother marked her early adulthood and set the tone for the rest of her life; a relationship with Julius Caesar, forged while under siege in her palace, launched her into a deadly mix of romance and strategy; a pleasure cruise down the Nile followed, a child, and a trip to Rome, which ended in Cleopatra’s flight. After Caesar’s brutal murder, she began a nine-year affair with Mark Antony, with whom she had three more children. Antony and Cleopatra’s alliance and attempt to forge a new empire spelled both their ends.

The subject of gossip and legend, veneration and speculation in her lifetime, Cleopatra fascinated the world right up to her death. In the 2000 years since, myths about the last Queen of Egypt have been fueled by Shakespeare, Dryden, and Shaw, who put words in her mouth, and by Michelangelo, Delacroix, and Elizabeth Taylor, who put a face to her name. In Cleopatra, Pulitzer prize-winning biographer Stacy Schiff accomplishes a feat that has eluded artists and writers for centuries: capturing fully the operatic life of an exceptionally seductive and powerful woman, whose death ushered in a new world order.

Stacy Schiff is the author of Véra (Mrs. Vladimir Nabokov), winner of the Pulitzer Prize; Saint-Exupéry, a Pulitzer Prize finalist; and A Great Improvisation, winner of the George Washington Book Prize and the Ambassador Book Award. She has been a Guggenheim Fellow, and a fellow at the center for Scholars & Writers, and received an Academy Award in Literature from the American Academy of Arts and Letters. Schiff has contributed to The New Yorker and The New York Times, where she has been an op-ed columnist.

You can view a video here and listen to an excerpt here.

I have 2 Audio Book copies of Cleopatra by Stacy Schiff up for grabs. To enter…

This giveaway is open to US & Canadian residents only (no PO boxes, only 1 copy per household). I will draw for the winners on Saturday, January 15, 2011. Good luck everyone!