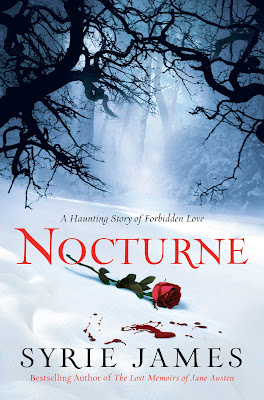 Good morning to you all! I’ve got a great giveaway to share with you this morning! I’ve got Syrie James newest novel, Nocturne, to give away. Now Syrie is the popular author of such books as Dracula, My Love, The Secret Diaries of Charlotte Bronte and The Lost Memoirs of Jane Austen. Her newest Nocturne, releasing on January 4, 2011, sounds like another utterly fantastic novel which is being described as A Haunting Story of Forbidden Love. I’m really excited to showcase the book today and be sure to pop back on January 10 of the new year as I’ll be reviewing the book for you.

When Nicole Whitcomb’s car runs off a Colorado mountain road during a blinding snowstorm, she is saved from death by a handsome, fascinating, and enigmatic stranger.

Snowbound with him for days in his beautiful home high in the Rockies, she finds herself powerfully attracted to him. But there are things about him that mystify her, filling her with apprehension.

Who is Michael Tyler? Why does he live in such a secluded spot and guard his private life so carefully? What secret—or secrets—is he hiding?

Nicole has secrets of her own and a past she is running from—but Michael understands her better than anyone she has ever known. Soon, she is falling as deeply in love with him as he is with her— a profoundly meaningful experience that is destined to change their lives forever.

As the sexual tension between them builds, however, the clues mount up. When Nicole learns her host’s terrifying secret, there is nowhere for her to run but into the blizzard raging outside, and Michael may be the only one who can save her life.

Filled with unexpected twists and surprises, Nocturne is a page-turning, haunting, and deeply romantic story of forbidden love that will grab your heart and not let go.

Make sure to check out the excerpt of the book and the Reading Group Guide as well which makes it a great choice for your book club.

Syrie James is the bestselling author of the critically acclaimed novels Dracula, My Love and The Secret Diaries of Charlotte Brontë, selected by the Women’s National Book Association as a Great Group Read of 2009. Her first novel, The Lost Memoirs of Jane Austen, became an international bestseller and was named a Best First Novel of 2008 by Library Journal. Translation rights for James’s books have been sold in fifteen languages. James lives in Los Angeles and is a member of the Writer’s Guild of America.

Be sure to check out Syrie James website as well as her blog! Nocturne is available to pre-order here in the US and here in Canada.

I have 1 copy of Nocturne by Syrie James to share with you. To enter:

This giveaway is open to US & Canadian residents only (no PO boxes) and I will draw for the winner on Tuesday, January 4, 2011. Good luck to you all!