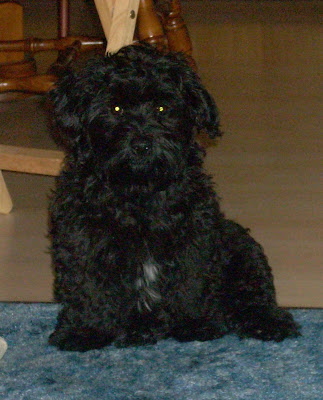 Good morning everyone! It’s snowy and cold here – it hasn’t been winter for long and I’m already tired of it. Not much going on today except for getting the tree decorated which should be interesting since it’s sitting on top of an end table. Other than that I really hope to catch up on some more reading if the little guy will let me.

Sammy has now mastered the outside steps to the backdoor and the one into the house. He’s been scared of that one but the other day he just jumped right on over and has been since. The same with the house stairs – all of a sudden he just seemed to know what to do to get up them. It’s kind of cute how he goes up though – kinda sideways. He still hasn’t attempted going down but I hope he does soon so I can quit carting him around although that will give him even more opportunities to sneak off and destroy things without me knowing. Otherwise he’s just been raining havoc on the house as usual. I put his toys away each night and each morning he proceeds to scatter them across the living room. I’ll get a video of that mess next week.

On a different note Sammy is quite destructive. He destroys every toy I give him. I bought him a nice fleece blanket with a cute little paw sewn into it. Well it now has a very big hole because he’s trying his hardest to eat the paw. Yet another thing on my list to try to repair. Those rope toys – he pulls the strings out within minutes. Buddy had those for years without mishap. It’s just unreal – I have no words for the damage this one can do if he feels like it. I will say though right now I think he’s teething really bad because when he chews on my hand he’s chewing extra hard. 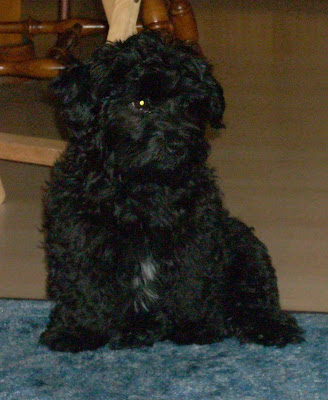 I think the most fun is that he doesn’t know stop or stay so as he thinks everything is a game it’s often quite impossible to catch him. On top of it he’s not really fond of treats so I’m not sure how I’m going to go about training him. Of course I praise him when he does something right but still I need some way of rewarding him. He’s really smart so I know he can learn – he’s also very stubborn and only does what he wants most of the time. I know I’ve said this a million times already but he is a handful and a half. I’m just amazed that one little fellow can get into so much trouble. Stop watching him for one second and he’s found something to get into or destroy. lol.

On the reading front I’m still working on The Forever Queen by Helen Hollick. It’s a chunkster and I fit reading in between chasing the dog. I should have it finished in the next day or so though. That’s the only book I’m concentrating on — I have several others to catch up though and I hope by the end of January I’m at least caught up on the ones I recently had committed to like in August and September.

The video I’m going to share with you today is how much fun I have with Sammy outside (please ignore the doggie do piles). In this video you’ll see that Sammy is learning to bark and bark quite well and loudly. He also hates my big white boots which you can’t see but which he is barking up a storm at and trying to attack.

So, what has everyone else been up to this weekend? Are you all ready for Christmas? Did you manage any reading this weekend? I hope you all have a fantastic week ahead!