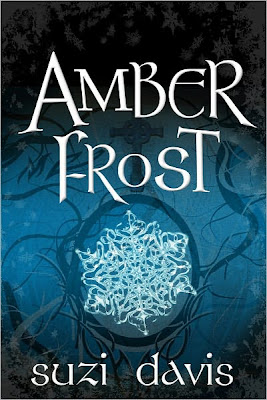 Amber Frost is the debut novel of Suzi Davis. It is a Young Adult/Teen paranormal romance that has an unique and intriguing story line that was a great break from all the vampire stories going around.

Grace Lynn Stevenson has everything an eighteen year old girl could want. She lives with her wealthy parents in a ritzy neighborhood and she herself is pretty and popular – what more could a girl want. Yet Grace isn’t happy. She never sees her busy parents and when she does it’s to them, especially her mother, trying to form her into the perfect daughter. So far she’s conformed to what they want but lately…lately she finds herself becoming really tired of being what everyone else wants instead of just being herself. Despite having it all she’s sad and lonely – something is missing from her life – she just doesn’t know what it is.

In art class one day Grace meets the mysterious Sebastian and from there her life seems to head in a totally different direction. Sebastian is gorgeous – Grace can’t help but notice that – and for some reason she feels drawn to him even though he’s most definitely not of her class. Sebastian is so different from anyone she’s ever known and as time goes on she realizes there are a lot of things about Sebastian that just don’t add up. She begins noticing that Sebastian only has to wish for something and it seems to happen. She confronts him eventually only to find out that Sebastian has no idea who he really is. He can’t remember his past but what he does remember is that he is old – very, very old – even though he only looks eighteen.

Sebastian has been searching the world for a very long time – searching for someone he lost years ago. Will he find what he’s looking for? Will he be discovered for what he really is? Will he ever remember his past enough to understand his future? Will he give up his life for Grace or she for him? Ultimately will Grace be safe or will he lose her too?

One thing I really enjoyed about this book was the romance between Grace and Sebastian. It was sweet and pure. It built up from the beginning when they meet yet never goes overboard. I guess I would describe it as refreshing. I liked the characters although at times I found myself thinking, especially in the beginning, that Grace was really immature but then I thought back to when I was eighteen and realized I was no different. It is a young adult novel so as an adult you sometimes have to take a step back from the normal teenage angst and realize that and just fall into the story and enjoy which is what I did.

The novel definitely kept my attention as more and more of the mystery and paranormal aspects unfolded. I just had to keep reading to see what would happen next and while I could see the ending coming I didn’t feel let down at all. It just felt right. What’s better is that there is a sequel coming and I can’t wait to read it and see what comes next for this story. Suzi Davis writes beautifully, lyrically. I found her vividly beautiful descriptions of the land and the emotions her characters were feeling captivating.

If you’re a lover of Young Adult novels I would recommend Amber Frost – especially if you’re one of those like me who loves the magical and paranormal elements. At first I wasn’t sure about it as I thought it was just going to be about a spoiled rich girl but then it evolved into so much more as the character of Grace grew. I really enjoyed the book and will most definitely be on the lookout for the sequel.

Amber Frost by Suzi Davis is available as an eBook only. It can be purchased here through Amazon in the US and here in Canada through Kobo. Be sure to check out Suzi Davis’ website as well!

My copy of Amber Frost by Suzi Davis was provided for review by ireadiwrite Publishing.