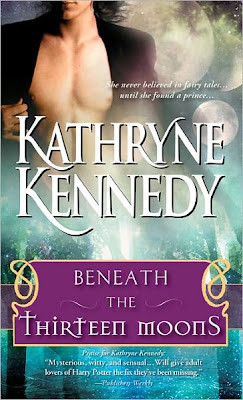 Beneath the Thirteen Moons is a unique and magical fantasy world created by Kathryne Kennedy. The world they live in is called The Sea Forest and it is a world covered in water in which people live in trees growing out of the ocean floor. Your imagination just runs wild at all the descriptions of the land, flowers, and sea creatures.

Mahri Zin is water rat; she is the low of the low making a living by smuggling zabba root. Zabba root is extremely powerful and can kill people but luckily Mahri has an affinity for it and for her it gives her increased powers. She is widowed having lost her lifemate and child to the plague. Now the plague is again threatening her village and trying to take the only family she has left.

Mahri’s solution is to kidnap a healer since asking for one has gotten her nowhere. The bad thing about this plan is that she manages to kidnap none other than the Prince of the Sea Forest who is very powerful. So the battle for power between the two begins not to mention the sparks of lust. After spending some time in her village they head back to the Prince’s castle and once there he kidnaps her right back.

However Mahri isn’t one to be caged up and held prisoner. She needs to be free. Will Korl realize this and let her be free? Or will he keep her because he wants her for himself? Will Mahri ever bend even just a little bit for Korl or keep being stubborn and shielding herself from him?

While I really loved the magical world that Kathryne Kennedy built, I was less impressed with the romance side of this book. Now I’m not one for a lot of romance in a book but I would have liked to see the relationship between Mahri and Korl build up instead of jump right in. I’m also not one to mind a little sex in a book but I found this one just had a bit much for my tastes.

Still if you’re in the mood for a journey into a different kind of book – I’ve not seen a world such as the one in Beneath the Thirteen Moons- then you’re in for a treat with this book. I liked the characters, especially Mahri’s pet monk-fish Jaja. I absolutely loved the vivid descriptions of the scenery and the world that they traveled through. It could have been lighter on the graphic sex for me but all in all I still enjoyed delving into the watery world of The Sea Forest for a while.

My review copy of Beneath the Thirteen Moons by Kathryne Kennedy provided to me by Sourcebooks.