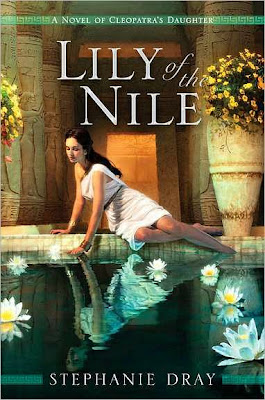 Lily of the Nile by Stephanie Dray is a novel that weaves fact with fiction and gives us some insight into the life of Cleopatra’s daughter Selene and I found it fascinating. I was first introduced to Cleopatra and her daughter in the wonderful Michelle Moran’s Cleopatra’s Daughter which I loved! So when I first saw Lily of the Nile I knew I would want to read it and see what Stephanie Dray would do with the character of Selene and luckily I was not disappointed.

I think what I liked the most about Stephanie Dray’s portrayal of Selene’s story was the element of magic that she weaved throughout the story. I’ve always believed in the magic that must have surrounded Ancient Egypt so to see it woven into the story of Selene so artfully was really wonderful. It made the novel that much more enjoyable for me.

The novel begins with what most people already know of the story of Cleopatra – when both she and Mark Antony kill themselves and Selene and her brothers are captured and taken to Rome to live under the very watchful eye of Octavian – the ruler of Rome. This is a different life for the children as they are of Egyptian royalty and are most certainly not treated as royalty in Rome. As time passes though, Selene realizes she carries magic she believes was passed on to her from her mother and Isis. It also becomes apparent that her younger brother also has some magical ability and her older brother is strong, much stronger than what would be normal. People, especially Octavian begin to look at Selene differently with her obvious intelligence and the swirl of magic that surrounds her.

Selene grows into quite the young lady. She carefully watches what is going on around her and uses it when she needs to. I really liked the spunkiness of her character and that she wasn’t afraid to stand up for what she thought or to discreetly fight for what she wanted. She was a strong personality from a child and it only grew with her into adulthood. There were many characters in this novel but it wasn’t hard to follow along with them at all. Of course I was already familiar with the story so that may have helped but some of the others I really liked were Julia and Octavia and would have loved to see their stories expanded on a bit too.

I loved all the pieces of history I learned throughout Lily of the Nile and I was really impressed with the vivid detail that Stephanie Dray used in describing the Rome of the past. While Michelle Moran’s novel was much more historical in it’s telling, Stephanie Dray’s novel adds the elements of fantasy and magic. So, if you enjoy that type of thing you will really like her telling of the story of Selene. I know I did! The best thing is that this is just the beginning of a trilogy by Stephanie Dray and I simply can’t wait for the next one!

Please check out the guest post and giveaway that Stephanie Dray wrote for Peeking Between the Pages. If you just can’t wait you can buy your own copy here in the US and here in Canada. Be sure to visit Stephanie Dray’s website and you can also check out more about Lily of the Nile in the tour stops for the book.