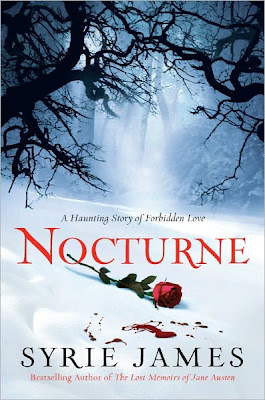 Nocturne by Syrie James is a novel of forbidden love. It is a haunting tale of one man’s secluded existence and the woman who brought him to believe that it was possible to live and love again.

Nicole is on her way home from her best friend’s wedding at a ski resort when a bad snow storm blows in (ironically enough I read this book at the same time we were having a blizzard). She manages to run her car off the road into a ditch and hit her head at the same time, passing out. When she wakes up it’s to a man tending to her – a very handsome man who has just saved her life.

Nicole is stuck – the roads are closed due to the snow storm – they won’t be open for days. To top it off the stranger, Michael, seems very strange. He has barely no food in the house and acts very standoffish. He has made it clear to her that he values his privacy above all else and that she can stay in her end of the house and he in his. Yet at the same time Nicole finds him fascinating and pushes to find out more about him.

Over time Nicole manages to break down Michael’s defenses, finding out more about him. Some things that lead her to find him even more fascinating, while others lead her to be more than a little scared of him. Still neither of them can deny the powerful attraction they have; the bond they seem to be forming together.

Michael has his secrets though – dangerous ones. At the same time Nicole is running from her past as well. This only binds them together even more – sharing their innermost feelings and falling more and more in love.

Keep in mind though that theirs is a forbidden love. Why you ask? Well Michael has a horrifying secret that could destroy any future that he and Nicole may have. Can their relationship work? Will they be together until the end of time?

Nocturne by Syrie James is a great escape novel. It’s got a bit of everything: some romance, paranormal elements, and more than enough suspense working up to an ending I didn’t quite expect. Anyone who enjoys a book that encompasses all of these should definitely enjoy this book. It sounds as though there might be a sequel and I’m hoping there will be. I’d certainly like to see where the lives of Michael and Nicole led after I turned that last page.

Nocturne by Syrie James released on January 4, 2011. You can purchase your own copy here in the US or here in Canada. Be sure to pop in and visit Syrie Jame’s website as well!

My review copy of Nocturne by Syrie James was provided to me by Elena of Wunderkind PR.