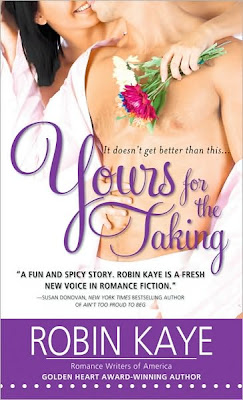 Now I’m not one for romance novels but from the first time I read one of Robin Kaye’s books I was a fan so I was excited to read Yours for the Taking, her newest novel. As usual Robin Kaye kept me reading with her witty and funny dialogue and just a plain old good story!

Yours for the Taking is a story of two people, Ben and Gina, who don’t believe in love. Gina has always been the type of woman to stand on her own two feet especially after a hard childhood and having to bring up her younger sister on her own. Ben is the kind of guy who has it all – he’s good looking and rich. The one thing he doesn’t have that he wants desperately is the deed to his parents ranch in Idaho. They died when he was young and the ranch is all he has left of them. His grandfather holds the deed and refuses to give it up until Ben, the proverbial bachelor, gets married and settles down.

So, here’s the problem. Ben needs a wife but Ben does not want to get married to some clingy woman that he’ll never be able to get rid off. After proposing to a family friend and getting turned down he thinks of Gina, a friend of his business partner, who would be perfect. She’s not a woman too interested in a permanent relationship and he’ll definitely make it worth her while. So Ben’s plan is hatched – get married, get the deed, and get divorced. He approaches Gina with his plan and of course she’s hesitant but she’d love to make sure her family is financially secure and then there’s this other reason she needs the money – plus what harm could it do – Ben is gay!

Gina realizes early on that she’s been duped. Ben is not gay and thank goodness for that since he’s the most gorgeous man she’s seen in a long time. They have to be married so why not enjoy themselves in the meantime. For Ben, he realizes early on that Gina is a little spitfire, completely different from any woman he’s ever met. Then there’s Ben’s family which is something Gina never expected – she actually likes them especially old Grandpa Joe. As the sparks begin to fly and things heat up between Ben and Gina, trouble also begins to brew. Will the two of them realize that maybe they aren’t meant to be alone but actually with each other?

Yours for the Taking by Robin Kaye is a funny and entertaining romance! I found this one of hers a little slower in the beginning but once it took off for me I couldn’t put it down. She remains a favorite of mine if I’m looking for something romancey with a good dose of hanky panky thrown in! You can buy your own copy of Yours for the Taking by Robin Kaye here in the US and here in Canada. Be sure to check out Robin Kaye’s website as well!

My copy of Yours for the Taking by Robin Kaye was provided for review by Sourcebooks.