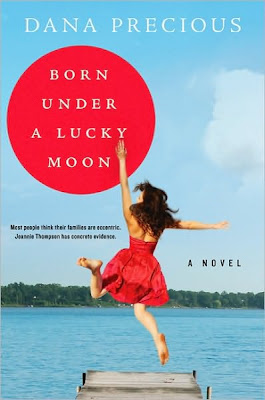 I’m very excited to spotlight a debut novel today – Born Under A Lucky Moon by Dana Precious and give away a few copies to my readers! I even learned that the novel is based on the author’s true story and its described as funny and heartwarming which only makes me more excited to read it. It releases on February 8, 2011 by HarperCollins.

About the Book (from Born Under A Lucky Moon website)…

The first inkling I had that I might be a writer was when I was ten years old. My dad and I drove past a billboard announcing a new car. The headline was ‘The Eagle Has Arrived’. I turned to my dad and said, “Wouldn’t it be better if it said ‘The Eagle Has Landed’?”

I never took a writing class. I was too afraid I would be told I wasn’t good at it and that would be that. So I just read everything I could get my hands on. My Fifth Grade book report was on Trinity – a book about twelve hundred pages long. I didn’t much understand it and neither did my Fifth Grade class. I completed my first (unpublished) novel when I was twenty years old.

The novel Born Under A Lucky Moon, while fictional, is based on real life events in my life. The story that takes place in 1986 is largely true. It noodled around in my head for decades until I knew I had to write it down just to stop thinking about it. I did compress some events to fit into a specific time frame. The two weddings on one weekend did happen in the way it was written. The Bear Lake Tavern did and still does exist.

If any one of my siblings had written this story instead of me it might have been framed as a tragedy. But my heroes of literature are Fanny Flagg and Erma Bombeck. I didn’t want to write a tragedy. I wanted to write a warm comedy that understood that families are complicated but that they still love each other deeply. I was also weary of reading a book jacket that cheerily announced the story was “Funny and poignant” only to discover that it was yes, poignant, but downright depressing. I wanted to make readers feel good and laugh.

Why I felt I had to write part of Born Under A Lucky Moon also as a present day love story was not self evident to me for a long time. It just kind of kept inserting back itself into the book – much like it kept inserting itself into Jeannie’s life. It started as a tale of two confused lovers with the most vague of a Hollywood setting. Gradually it took form and I’m pleased with the results. Hopefully you will be too. Other than the fact that I worked (and still work) as a film studio marketing executive, this part of the story is completely fictional. Maybe I was inspired by the behaviors, excesses and eccentricities that I witnessed in the film business but no character, event or place is true.

Dana Precious lives in Los Angeles with her husband and son. She has two dogs: a small border terrier named Thompson (as in Hunter—long story) and Bella, a very large bullmastiff whose activity of choice is sleeping on the couch and watching Oprah. Prior to writing, Dana worked for several major film studios.
———-

I don’t know about you but I’m excited to give Born Under A Lucky Moon a read once my copy arrives!

I have 2 copies of Born Under A Lucky Moon by Dana Precious to share with you courtesy of HarperCollins. Isn’t that fantastic! To enter…

This giveaway is open to US & Canadian residents only (no PO boxes) and I will draw for the winners on Saturday, February 19/11. Good luck everyone!