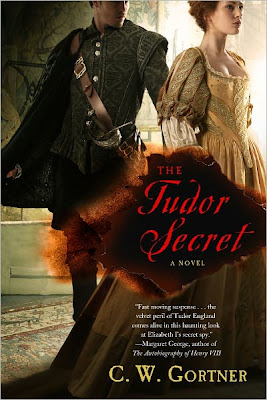 The Tudor Secret by C.W. Gortner is why I love historical fiction! It was fantastic! The Tudor Secret has it all – mystery, intrigue, suspense, lies, betrayals, and best of all it’s centered around the Tudor time period! The Tudor Secret is loosely woven in with historical facts and it’s nice not to get get bogged down with a lot of details sometimes. This story gave me just enough facts but what was really great is that it picked me up and took me to a different time and place and The Tudor Secret will do that for you too!

Brendan Prescott was a foundling; he knew from a young age that he had been abandoned. He was brought up by Alice who was a mother to him until she was killed when he was still young and he had loved her dearly. Now all these years though Brendan has been raised to be a servant to the Dudley boys. When he’s called to court, it’s to be a squire to Robert Dudley. However, as we all know things never go as planned at court and soon Brendan finds himself in the midst of a tangled plot in which he is sent in different directions to spy and deliver messages.

Soon Brendan meets none other than the Princess Elizabeth (King Henry VIII’s daughter) and is quite taken with her. There is much going on with Elizabeth’s very ill brother Edward and she has demanded to see him. However, she is in much danger herself at court but being headstrong and determined, she is not one to listen to reason. There is a plot afoot to get rid of the sisters, both Elizabeth and half-sister Mary, but Brendan is determined that no harm will come to either.

Brendan is a terrific fictional character and I just loved him. Being an orphan he learned quickly to live by his own wits in addition to soaking up every bit of learning he could making him very intelligent. The court is a whole new world to him yet he is recognized early on as being smarter than your average squire. Brendan though, other than protecting the people he cares about to any lengths, wants to know who he really is. As the plot continues to thicken, more and more of where he came from and who he is begins to come to the forefront and he is eventually shocked to learn the truth of his heritage.

There are other fantastic characters though. I was particularly fond of Peregrine, the young lad who becomes like a son to Brendan. Peregrine, an orphan himself, really reminds Brendan of who he was growing up – they have a connection. Brendan too seems to be a bit of a hazard to himself and whenever left alone seems to end up in trouble so Peregrine takes it upon himself to always trail after his master. All of the characters are portrayed really well and while the book does assume you have some knowledge of Tudor history I think anyone really could pick it up and enjoy it.

C.W. Gortner states in the author’s note that this novel takes the approach of ‘what if’?’ He took fact, fiction, rumor, deduction, and imagination to craft this story and I think he did a fabulous job. If you’re looking or expect a story with accurate fictional details then this may not be for you. However, if you can just let go and take the story for what it is, you will enjoy it immensely. It’s a fun spin on Tudor history and I can’t wait for the next installment in The Elizabeth I Spymaster Chronicles. Many times reading The Tudor Secret I really felt like I was right there. C.W. Gortner has a way with words that has you living in the world he’s created in his novel.

My copy of The Tudor Secret by C.W. Gortner received for review from Pump Up Your Book and the Publisher.